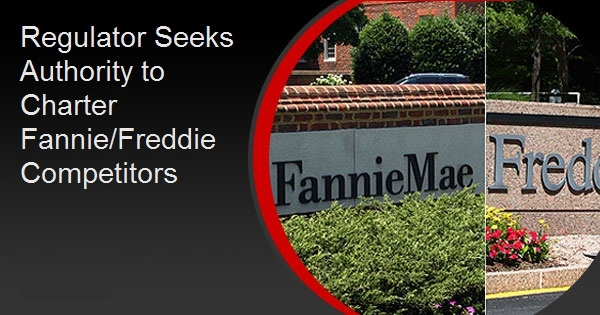 The Federal Housing Finance Agency (FHFA) released its annual Report to Congress for 2019 on Monday. The report summarizes the FHFA's activities as regulator of the Federal Home Loan Banks (FHLBanks) and as both regulator and conservator of the GSEs Fannie Mae and Freddie Mac. The report addresses how FHFA has fulfilled its statutory responsibilities, the financial condition of the GSEs and FHLBanks, and details the agency's response in 2020 to the COVID-19 outbreak.

FHFA Director Mark Calabria again called on Congress to reform the nation's housing  financing system, saying that only legislative action can address the flaws that were at the root of the 2008 financial crisis and continue to pose risks to taxpayers and financial stability.  He said, "There are critical vulnerabilities in our housing finance system that put taxpayers and our housing market at risk. The financial stress on our mortgage markets caused by the COVID-19 crisis is only the latest example."

FHFA is asking to be given additional regulatory and supervisory authority to prepare for the eventual end of the GSE conservancy. The agency reiterated its request for chartering authority such as already in the hands of other federal financial regulators such as the Comptroller of the Currency. This would enable FHFA to charter competitors to the GSEs.

The report says that prior to the financial crisis of 2008, the GSEs with their congressional charters, size, and importance within the system, created the impression that they were "too big to fail" and thus had the implied backing of the federal government behind their own loan guarantees. Relying on that perception, each GSE was able to borrow at interest rates close to that of the federal government while maintaining unsafe and unsound levels of leverage. That and other regulatory advantages over private-sector competition fueled their rapid growth, while their leverage shifted risk to taxpayers, created moral hazard, and incentivized excessive risk taking.

The ability for the FHFA to charter competition would move the financial situation beyond the current duopoly market structure. This is critical to ending taxpayer bailouts of "too big to fail" institutions the agency says. Competition would reduce the systemic importance of Fannie Mae and Freddie Mac which would increase FHFA's capacity to resolve either should they become insolvent. It would also enable it to mitigate moral hazard, increase market discipline, and protect taxpayers against future bailouts. Newly chartered competitors would increase efficiency and innovation within the national housing finance markets, driving down costs for borrowers and leading to new products and advances in underwriting.

A generally available charter, available to each GSE and to competitors would require all to support equitable access to the secondary market. To enhance safety and soundness regulation, FHFA should, like the federal banking regulators, have the authority to revoke an FHFA-granted charter in the event of ongoing mismanagement or other limited circumstances that threaten safety and soundness.

"FHFA will continue to take administrative action, pursuant to the Agency's statutory responsibilities," Calabria said, "to ensure that the regulated entities operate in a safe and sound manner to foster liquid, efficient, competitive, and resilient national housing finance markets. However, only Congress can resolve the flaws in the structure of the nation's housing finance system. Reform is long overdue. The time to act is now."