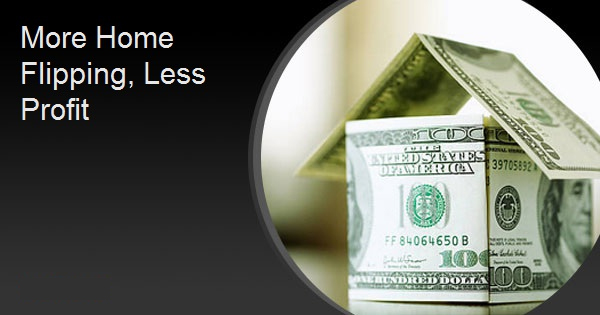 ATTOM Data Solutions says 53,705 single-family homes and condos qualified as flips during the quarter. At the prior peak in 2006 there were around 80,000 homes were considered flips. But the investors who are doing the flipping are seeing diminishing returns. Homes flipped in the first quarter of 2020 were sold for a median price of $232,000, with a gross flipping profit of $62,300 above the median purchase price of $169,700. Thus, the return on the original investment (ROI) was 36.7 percent versus 39.5 and 40.9 percent in the two earlier quarters. This was the lowest profit margin since the third quarter of 2011. "Home flipping has gradually taken up a larger portion of the housing market over the last couple of years. But profits are down and are lower than they've been since the dark days following the Great Recession, which is a sign that investors aren't keeping up with price increases in the broader market," said Todd Teta, chief product officer at ATTOM Data Solutions. "Enter now the Coronavirus pandemic and the prospects for home flipping are notably uncertain, at least in the short term. We should know a lot more in a few months about whether home prices drop and investors get hit hard, or whether they can increase their profit margins."

The market share of home flips increased in 122 of the 140 metro statistical areas tracked during the first quarter. The largest gains were in Boston and Springfield, Massachusetts, up 80.2 percent and 76 percent); Olympia, Washington (increasing by 73 percent); York, Pennsylvania (up 71.4 percent) and Minneapolis, (69.3 percent). The flipping share fell in San Antonio, Austin, Oklahoma City, and Houston, dropping in these areas (all heavily reliant on the oil and gas industry) by between 13 and 0.6 percent.

Profit margins decreased from the first quarter of 2019 to the first quarter of 2020 in 75 of the 140 metro areas with enough data to analyze. The biggest downturns were in Fort Collins and Greeley, Colorado, each with declines of more than 70 percent. Also down were Springfield, (a 64 percent decrease), Durham, North Carolina and Provo, Utah (down 62 percent and 50 percent respectively.)