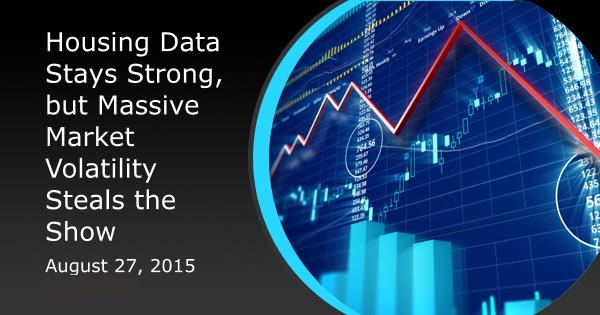 There are 3 general groups of people when it comes to financial markets: those who actively participate (traders/analysts/reporters), those who do a pretty good job of keeping in touch with the relevant developments, and those who only encounter market news when it’s dramatic enough to circulate in non-financial circles.  For instance, if you didn’t know the Dow was down more than 1000 points during the course of the day on Monday until the nice old part-time grocery store clerk asked if you’d heard, you’re in group 3.

This has been one of those weeks where almost everybody in group 3 at least heard about the wild ride in the stock market.  It was made all the more dramatic by the fact that it followed 3 days of heavy losses in their own right last week.  The market volatility completely overshadowed the rest of the week’s data and events, even spilling over into the world of mortgage rates.

It’s no big secret that interest rates are an interconnected cog in the overall financial market machine.  In fact, the concept is often taken too far by overly-simplistic explanations for market movement.  All too often, pundits will suggest that rates move lower when stock prices move lower.  “Sell stocks, buy bonds!” is the cliché (bond buying results in rates moving lower).

Indeed, there CAN BE a good amount of truth to this relationship.  Often times, investors will actually be changing asset allocations by decreasing their holdings of stocks and increasing holdings of bonds.  But it’s important to know it’s not even remotely close to being guaranteed, or even probable on any given day.  It’s more the sort of thing that works really well as an explanation in hindsight, but that leaves all but the most dedicated market participants scratching their heads when the correlation breaks down.

To understand how badly and how often it can break down, just look at the last few years of stocks vs bonds.  In early 2015, stocks were making new all-time highs while bonds were returning to the same levels seen back in 2012, when the Dow was more than 3000 points lower. 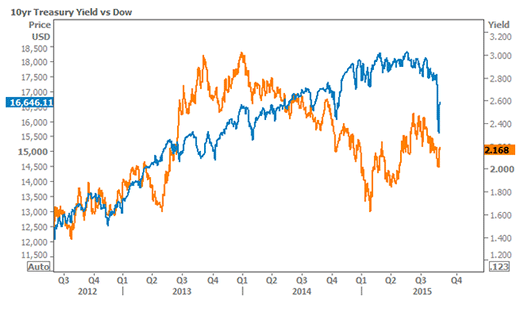 What does all this have to do with Housing and Mortgage markets?  That depends on how deeply you wish to consider the implications and how much you want to speculate on the future.   Some of the speculators reckon that global financial markets are taking a turn for the worse—or at least for a turn toward slower growth—and that this week was warning shot.  If that happens, it would be positive for interest rates and potentially negative for housing.

Interest rates had already been falling for more than a month by the start of this week (their longest rally of the year).  In fact, they were looking like they very much wanted to bounce back up and consolidate those gains.  ‘Consolidation’ or in more extreme cases ‘correction’ is a natural byproduct of any strong, sustained movement in financial markets.  The stronger and more sustained the move, the greater the need to consolidate.  Given the fact that rates were only pulled modestly lower by Monday’s massive panic in other markets, it’s no surprise that rates bounced back higher as soon as the panic began to subside.

This remains a tentative situation though, and one that market participants will be watching closely.  Even if slowing global growth were to bring interest rates down, a weaker economy can hurt housing demand, especially at the lower end of the price/income  spectrum where affordability problems are the most prevalent.

We’ll cross that bridge if we come to it.  For now, the most recent housing data remains stable to stronger.   New Home Sales regained momentum in July after losing ground in June.  And several reports on home prices showed steady improvements.  Truth be told, the housing market suffers from a bit of data overload at the moment.  There are multiple accounts of the same general themes.  So to make things simple, those themes are as follows:

On a final, qualitative note, there is no sense of irrational exuberance regarding housing at the moment.  It’s strong, but any exuberance exists in smaller, crazier pockets of geography.  In many cases, the home buying environment varies tremendously even between neighborhoods in the same city.  Current lending guidelines are so much more thorough than the pre-crisis era that we know we’re dealing with organic demand from buyers as opposed to the get-rich-quick bandwagon that helped fuel the housing crisis.

Bottom line, things are good, but not so good that we should be concerned.  Concern can come from other factors though.  With that in mind, we’ll be carefully watching the global growth story unfold.  Interest rates can only do so much to help sustain strength in housing.  Alone, low rates couldn’t do enough to offset a large-scale shift in growth.