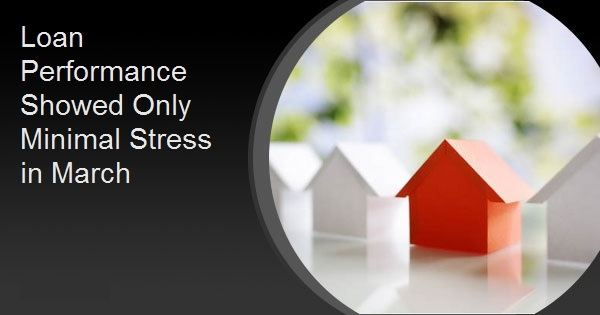 The strength of the housing industry at the end of 2019 and beginning of 2020 served, to a certain extent, as a buffer as the COVID-19 pandemic began to hit in March. However, CoreLogic says that there were still some signs that month that loan performance was beginning to fray.

The company's March Loan Performance Insights Report says the share of mortgages that transitioned from current to 30 days past due reached its highest level since 2013 as unemployment began to rise. The transition rate increased to 1.0 percent from 0.9 percent in March 2019. In January 2007, just before the start of the financial crisis, the current- to 30-day transition rate was 1.2 percent and it peaked in November 2008 at 2 percent. CoreLogic says those effects will probably continue to become more apparent over the next year - especially as home prices are forecasted to experience their first decline in 9 years in 2021.

On a national level, 3.6% of mortgages were in some stage of delinquency (30 days or more past due, including those in foreclosure) in March. This represents a 0.4-percentage point decrease in the overall delinquency rate compared with when it was 4%.

The rate for early-Stage Delinquencies, loans that were 30 to 59 days past due was 1.9 percent compared to 2 percent a year earlier and 0.6 percent of all loans were 60 to 89 days past due, unchanged from the prior March. The serious delinquency rate, loans 90 or more days past due or in foreclosure was 1.2 percent, down 0.2 percent year-over-year. It was the third straight month that serious delinquencies were unchanged and at the lowest rate since June 2000. The foreclosure inventory, the share of mortgages in some stage of the foreclosure process, was unchanged from March 2019 at 0.4 percent and foreclosures remained at the lowest level in at least 21 years for the 17th consecutive month.

"The first three months of 2020 reflected one of the strongest quarters for U.S. mortgage performance in recent history," said Frank Martell, president and CEO of CoreLogic. "The build-up in home equity over the past several years, government stimulus programs, and lower borrowing costs have helped cushion homeowners from the initial financial shock of the pandemic and kept widespread delinquencies at bay during the first months of the recession. Looking ahead, we can expect a more widespread impact on U.S. delinquency rates as the economic toll of elevated unemployment and shelter-in-place orders becomes more evident."

In February, the U.S. annual unemployment rate hit a 50-year low and the nation's overall delinquency rate continued to decline year-over-year, following a trend that began in January 2018. Then, as shelter-in-place orders went into effect in March the job market began its downward spiral, thus increasing the likelihood of borrowers falling behind on their mortgage payments.

CoreLogic says those local economies fueled by tourism, transportation, hospitality, food service and media and entertainment industries such as Hawaii and Nevada were the first to be hit by widespread job losses as were states like Washington, where the first U.S. cases of the virus were confirmed. In early May, these states experienced the highest shares of continuing claims for unemployment insurance, as compared to the state's labor force. While the full impact of climbing unemployment in these local markets has yet to be seen, the early signs of unsteadiness could leave these areas more susceptible to delinquency gains in the coming months.