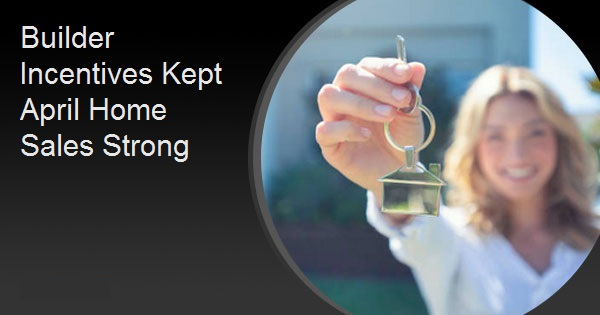 As was reported last week, new home sales in April were much, much better than expected. There may or may not be a cause and effect going on here, but two recent posts in the National Association of Home Builders' (NAHB's) Eye on Housing blog indicate that builders are at least trying to preserve some market momentum.

While builder confidence cratered in April and housing starts declined, Rose Quint reports that there is anecdotal evidence that builders were lowering the prices of newly constructed homes in April and that more than half report making sales accommodations in May.

The latest NAHB/Wells Fargo Housing Market Index (HMI) survey shows that about 22 percent of builders cut home prices in April 2020 in order to bolster sales and/or limit cancellations. Regionally, builders in the South (26 percent) and Midwest (23 percent) were the most likely to have reduced prices, compared with much smaller shares in the West (13 percent) and Northeast (12 percent). Again, there may be no relationship, but the Census Bureau reported that new home sales were up 2.4 percent in both the South and Midwest and down 6.3 percent in the West compared to March. However, sales were also up 8.7 percent in the Northeast, the region with the lowest reported incidence of price cuts.

Builders were much more likely to cut prices during earlier economic downturns. Fifty-two percent reported they had done so in May 2007 and 49 percent in March 2008. The reduction reported thus far during the pandemic averages 5 percent, again much smaller than cuts in both May 2007 (7 percent) and March 2008 (8 percent)

In May, the HMI survey found 52 percent of respondents were using concessions or incentives to either bolster single-family home sales and/or limit cancellations. The chart below shows the complete list of specific incentives being used, however Quint says those must frequently employed are options or upgrades at no or reduced cost and payment of closing costs or fees, each reported by 19 percent of builders, and price discounts or margin reductions (18 percent.) of those using incentives, most report paying for closing costs/fees is the most effective strategy. Twenty-seven percent rated it 'very effective' and 56 percent 'somewhat effective.' Again, incentives were much more widely employed during the last housing recession, with 73 percent and 71 of builders, respectively, reporting their use in May 2007 and March 2008. By April of 2019, (we assume this period relates to the build-up of new home inventories as interest rates moved higher) the share had fallen to 64 percent . The current 52 percent providing incentives in the midst of the COVID-19 crisis, is essentially the same share as back in April of 2003. What Quint does not say is that it was only in mid-March that the COVID crisis begin to impact the economy and builders have not had a lot of time to assess the damage nor formulate a response.