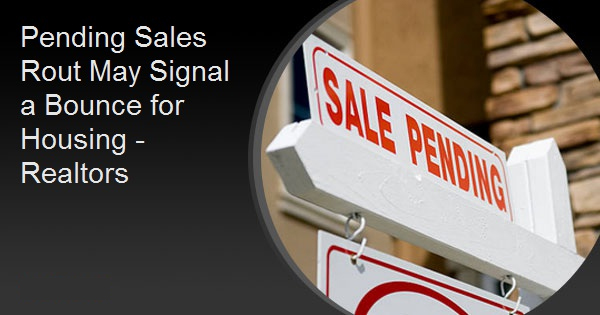 Pending Sales Rout May Signal a Bounce for Housing - Realtors

Pending home sales cratered again in April, marking two straight months of declines that exceeded 20 percent. The National Association of Realtors® (NAR) said its Pending Home Sales Index (PHSI) fell 21.8  percent to 69.0. The decline in March was 20.8 percent. The Index is down by 33.8 percent year-over-year.

NAR Chief Economist Lawrence Yun said he expects that April will be the lowest point for pending sales and subsequently May will mark the bottom for closed sales of existing homes.

The April results were even worse than analysts had expected. Those polled by Econoday had predicted a decline ranging from 12.0 to 16.4 percent. The consensus was 15.0 percent.

"While coronavirus mitigation efforts have disrupted contract signings, the real estate industry is 'hot' in affordable price points with the wide prevalence of bidding wars for the limited inventory," he said. "In the coming months, buying activity will rise as states reopen and more consumers feel comfortable about homebuying in the midst of the social distancing measures."

There appears to be a disconnect between the April PHSI and recent numbers on purchase mortgage applications from the Mortgage Bankers Association. Those applications have risen every week since April 17 and have improved over that period by an aggregate of 46 percentage points.

NAR said that buyers may be growing more comfortable with buying in the midst of the pandemic. In its most recent Flash Survey 34 percent of Realtors  reported successfully completing nearly all aspects of transactions while adhering to social distancing procedures.

"Given the surprising resiliency of the housing market in the midst of the pandemic, the outlook for the remainder of the year has been upgraded for both home sales and prices, with home sales to decline by only 11 percent in 2020 with the median home price projected to increase by 4 percent," Yun said. "In the prior forecast, sales were expected to fall by 15 percent and there was no increase in home price."

While pending sales were down in all four regions compared to March, the declines in the Midwest, South and West were less severe than those the prior month. In the Northeast, the PHSI sank 48.2 percent to 42.6 in April and was down 52.6 percent on an annual basis. In the Midwest, pending sales were lower by 15.9 percent at an index of 72.0 last month and by 26.0 percent year-over-year.

The PHSI is a leading indicator of existing home sales and is based on a large national sample, typically representing about 20 percent of transactions for existing-home sales. In developing the model for the Index, it was demonstrated that the level of monthly sales-contract activity parallels the level of closed existing-home sales in the following two months. NAR will release existing home sales results for April on June 22.

An index of 100 is equal to the average level of contract activity during 2001, which was the first year to be examined. By coincidence, the volume of existing-home sales in 2001 fell within the range of 5.0 to 5.5 million, which is considered normal for the current sales climate.