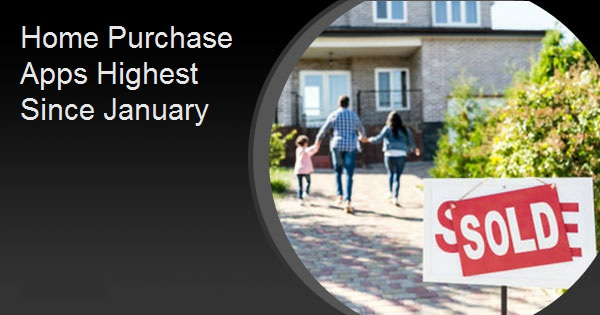 Purchase mortgage applications rose for the 6th straight week, driving the Mortgage Bankers Association's Market Composite Index back into positive territory. The Index, a measure of mortgage loan application volume, increased 2.7 percent on a seasonally adjusted basis during the week ended May 22. On an unadjusted basis, the Index increased 3 percent compared with the previous week.

The seasonally adjusted Purchase Index rose by 9 percent compared to one week earlier and was 7 percent higher on an unadjusted basis. The volume of purchase applications pulled ahead of the level during the same week in 2019 by 9 percent, the first year-over-year gain since the week ended March 6.

The Refinance Index decreased 0.2 percent from the previous week but remained 176 percent higher than the same week one year ago. The refinance share of mortgage activity decreased to 62.6 percent of total applications from 64.3 percent the previous week.

Mortgage rates were mixed. The average contract interest rate for 30-year fixed-rate mortgages (FRMs) with loan balances at or below the conforming limit of $510,400 grew by 1 basis point to  3.42 percent. Points were unchanged at 0.33 and the effective rate increased.

The average contract interest rate for jumbo 30-year FRMs, loans with balances greater than the conforming limit increased to 3.71 percent from 3.66 percent. Points fell to 0.29 from 0.37 and the effective rate increased.

The average contract interest rate for 15-year fixed-rate mortgages decreased to 2.87 percent from 2.88 percent, with points increasing to 0.30 from 0.27. The effective rate declined.

The average contract interest rate for 5/1 adjustable rate mortgages (ARMs) decreased to 3.08 percent from 3.19 percent, with points increasing to 0.01 from -0.05 and the effective rate moved lower. The ARM share of activity increased to 3.4 percent of total applications from 3.2 percent the previous week.

MBA also reported that forbearance plans in place on May 17 were up from 8.16 percent of servicer portfolios during the week ended May 10 to 8.36 percent. The number of plans rose from 4.1 million to 4.2 million.

Mortgages backed by Ginnie Mae (VA, FHA, and USDA loans) again had the largest overall share of loans in forbearance by investor type (11.60%) and the largest increase from the previous week (34 basis points). The GSEs Fannie Mae and Freddie Mac had 6.36 percent of their loans in plans, up from 6.25 percent the prior week. Loans in forbearance that were being serviced for others, such as private-label securities and portfolio loans accounted for 9.54 percent of that portfolio, up from 9.26 percent the previous week.

"Although job losses continue at extremely high rates, mortgage servicers are reporting only modest increases in the share of loans in forbearance as of May 17," said Mike Fratantoni, MBA's Senior Vice President and Chief Economist. "The decline in employment and income is hitting FHA and VA borrowers harder, leading to 11.6 percent of Ginnie Mae loans currently in forbearance."

Added Fratantoni, "Forbearance requests declined relative to the prior week, and while call volume picked up, servicers appear well staffed for this volume, as wait times and abandonment rates dropped. Total loans in forbearance grew relative to the prior week: from 8.16 percent to 8.36 percent. This 20-basis point weekly increase was the smallest increase reported since the week of March 9. MBA's latest Forbearance and Call Volume Survey covers the period from May 11 through May 17, 2020 and represents almost 77 percent of the first-mortgage servicing market (38.3 million loans).