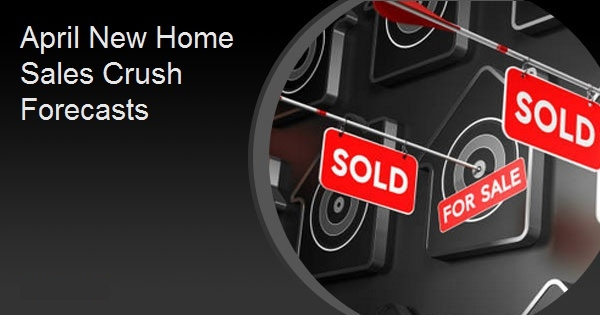 New home sales, rather than dropping like a rock, rose 0.6 percent in April according to the U.S. Census Bureau and the Department of Housing and Urban Development. Part of the gain is due to a revision of the March sales numbers from an original estimate of 627,000 seasonally adjusted annual units to 619,000. This added to the month's 15.4 percent decline from February. While April's sales of newly constructed homes were down 6.2 percent from a year earlier, the April estimate of 623,000 units is totally unexpected.

The consensus of analysts polled by Econoday was for an annual pace of 495,000 units with the highest estimate at 592,000 units. They weren't alone; the consensus from MarketWatch was 480,000 units while Trading Economics expected a decline of 21.9 percent.

While sales estimates for existing homes are counted at closing and so reflect to a certain extent contracts and economic factors from as much as two months earlier, new home sales are tallied at contract signing, which would put the April data squarely in the middle of COVID-19 shelter orders.

Sales held up well on a monthly basis in three of the four regions, increasing 8.7 percent in the Northeast and 2.4 percent in both the Midwest and the South. The West posted a 6.3 percent decline.

Robert Dietz, an economist for the National Association of Home Builders, thinks it is reasonable to expect the April data to be revised downward next month, given the persistent weakness in the labor market. Nonetheless, mortgage application data and anecdotal reporting from builders indicates that housing demand picked up in recent weeks, and he says,."Overall, the data lend evidence to the NAHB forecast that housing will be a leading sector in an eventual economic recovery."

The inventory of homes for sale at the end of April ticked down from 331,000 in March to 325,000. This represented a 6.3-month supply at the current rate of sales compared to 6.4 months in March.