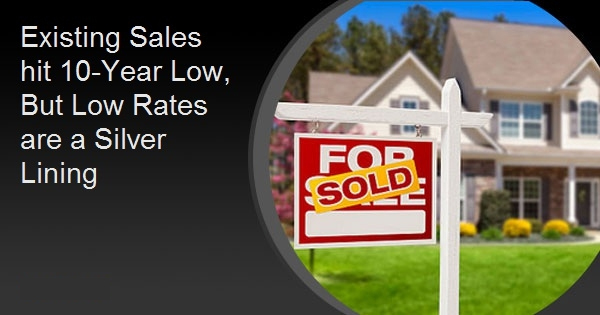 Existing home sales fell hard in April, the numbers coming in about where analysts expected them but breaking a nine-month string of annual gains. The National Association of Realtors® said total sales of single-family homes, townhouses, condos, and cooperative were at a seasonally adjusted annual rate of 4.33 million, down from the 5.27 million sold in March, a 17.8 percent decline. It was the lowest level of sales since July 2010 (3.45 million) and the largest month-over-month drop since July 2010 (-22.5 percent). The loss, which NAR said was due to the coronavirus pandemic, brings the aggregate decline over the last two months to 26.3 percent. Sales are now down 17.2 percent from the 5.23 million rate in April 2019

The rate of sales almost matched the 4.325 million-unit consensus estimate from analysts polled by Econoday. Their predictions had covered a range from 4.20 to 4.92 million.

"The economic lockdowns - occurring from mid-March through April in most states - have temporarily disrupted home sales," said Lawrence Yun, NAR's chief economist. "But the listings that are on the market are still attracting buyers and boosting home prices."

"There appears to be a shift in preference for single-family homes over condominium dwellings," Yun said. "This trend could be long-lasting as remote work and larger housing needs will become widely prevalent even after we emerge from this pandemic."

"Record-low mortgage rates are likely to remain in place for the rest of the year and will be the key factor driving housing demand as state economies steadily reopen," Yun said. "Still, more listings and increased home construction will be needed to tame price growth."

Even as sales slowed, inventory continued to shrink. Available houses at the end of April totaled 1.47 million, down 1.3 percent from March, and almost 20 percent lower than one year ago (1.83 million). Unsold inventory sits at a 4.1-month supply at the current sales pace, up from 3.4-months in March and down from the 4.2-month figure recorded in April 2019.

Fifty-six percent of homes sold in last month were on the market for less than a month.

First-time buyers were responsible for 36 percent of sales in April compared to 34 percent in March 2020 and 32 percent a year earlier. Ten percent of sales were to individual investors or second-home buyers and 15 percent were all cash, both several percentage points lower than in March. Distressed sales - foreclosures and short sales - were at 3 percent.

As was the case in March as well, April sales decreased in every region from the previous month's levels while median prices continued to rise. The Northeast and Midwest regions showed the strongest price gains.