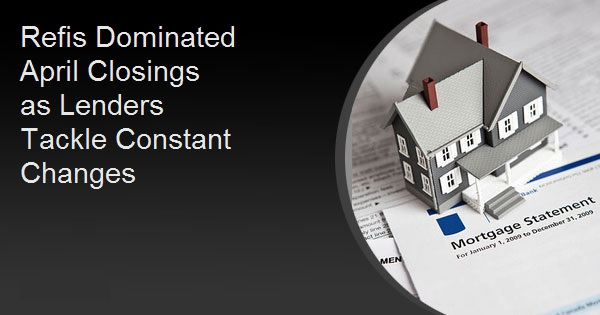 Interest rates on closed loans continued to decline in April, falling from 3.65 percent in March to 3.48 percent according to the Origination Insight Report from Ellie Mae. That prompted another surge in refinancing, with that portion of originations jumping from 55 percent in March to 65 percent. The refinancing share of conventional loans also rose 10 percentage points to 73 percent.

The share of conventional loans also surged, from 76 percent to 81 percent and continuing a trend that began in January. Conventional loans accounted for 71 percent of originations that month. The April share of FHA loans dropped 3 points to 10 percent in April and the VA share dipped to 1 point to 6 percent.

The time to close all loans increased from 40 to 42 days, although refinancing time lengthened by four days to 39. Purchase loans required an average of 46 days, one more than in March.

"Interest rates continued to decline in April, driving up the share of refinances by 10 percent," said Jonathan Corr, President and CEO of Ellie Mae. "We're also seeing FICO scores increase as lenders manage the current economic uncertainty by tightening credit. Ellie Mae has seen record volumes on our Encompass Digital Lending Platform in recent weeks, indicating that by leveraging digital mortgage technology, our lenders are able to serve their customers through this time of rapid change."

The Origination Insight Report mines data from a sampling of approximately 80 percent of all mortgage applications initiated on its mortgage management system. Ellie Mae says its report is a strong proxy of the underwriting standards employed by lenders across the country.