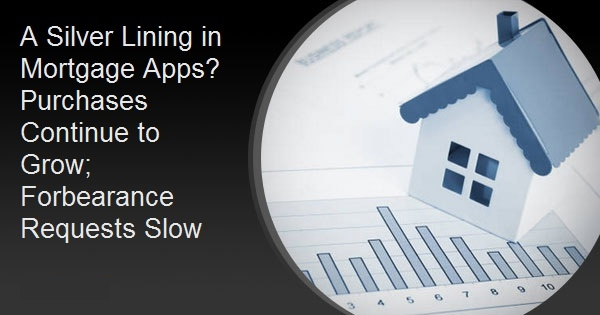 Purchase mortgage applications extended their recent run of gains through the week ended May 15. The Mortgage Bankers Association (MBA) said its Purchase Index rose 6 percent compared to the previous week on both a seasonally adjusted and unadjusted basis. It was the fifth straight week of improvement, and the index, which was down by as much as 35 percent from a year earlier in much of April has narrowed that gap to 1.5 percent.

MBA's Market Composite Index, a measure of overall application volume, was down 2.6 percent on a seasonally adjusted basis and 2 percent unadjusted, dragged down by the 5th consecutive decline in refinancing. The Refinancing Index fell back by 6 percent compared to the prior week, but was still 160 percent higher than during the same week in 2019. Refinancing applications accounted for 64.3 percent share of the total, down from 67.0 percent the previous week.

"Applications for home purchases continue to recover from April's sizeable drop," Joel Kan, MBA's Associate Vice President of Economic and Industry Forecasting said. "Government purchase applications, which include FHA, VA, and USDA loans, are now 5 percent higher than a year ago, which is an encouraging turnaround after the weakness seen over the past two months. As states gradually reopen and both home buyer and seller activity increases, we will be closely watching to see if these positive trends continue, or if they reflect shorter-term, pent-up demand."

Added Kan, "Despite mortgage rates remaining close to record-lows, refinance activity slid to its lowest level in over a month. The average loan amount for refinances fell to its lowest level since January - potentially a sign that part of the drop was attributable to a retreat in cash-out refinance lending as credit conditions tighten. We still expect a strong pace of refinancing for the remainder of the year because of low mortgage rates. With many homeowners still facing economic and employment uncertainty, these refinance opportunities will allow them to save money on their monthly payments, which can then be used to help other areas of their budgets."

Interest rates for all loans except those backed by the FHA declined on both a contract and an effective basis. The FHA 30-year fixed rate mortgage (FRM) rose 9 basis points to 3.46 percent. Points increased to 0.33 from 0.21 and the effective rate was also higher.

The average rate for jumbo 30-year FRM, loans with balances exceeding the conforming limit,  decreased to 3.66 percent from 3.69 percent. Points rose to 0.37 from 0.33.

The average contract interest rate for 5/1 adjustable rate mortgages (ARMs) decreased to 3.19 percent from 3.26 percent and points fell to -0.05 from 0.04 .The ARM share of activity increased to 3.2 percent of total applications from 2.9 percent.

MBA also announced that the number of loans now in forbearance rose to 4.1 million last week, 8.16 percent of loans in servicer portfolios. Results from MBA's prior survey which ended on May 3 counted 4.0 million loans in forbearance, a 7.91 percent share. MBA said that the 25-basis point week-over-week growth in the percentage was the smallest weekly increase since the week of March 16.

The largest share of loans in forbearance plans continue to be those serviced by Ginnie Mae. Those increased from 10.96 percent of the its portfolio to 11.26 percent. The share of Fannie Mae and Freddie Mac loans rose relative to the prior week from 6.08 percent to 6.25 percent. The share of loans serviced for others (e.g., private-label securities and portfolio loans) in forbearance increased from 8.88 percent to 9.26 percent.

"The pace of forbearance requests continued to slow in the second week of May, but the share of loans in forbearance increased," said Mike Fratantoni, MBA's Senior Vice President and Chief Economist. "There has been a pronounced flattening in loans put into forbearance - despite April's uniformly negative economic data, remarkably high unemployment, and it now being past May payment due dates. However, FHA and VA borrowers are more likely to be employed in the sectors hardest hit in this crisis, which is why more than 11 percent of Ginnie Mae loans are currently in forbearance."

MBA's latest Forbearance and Call Volume Survey covers the period from May 4 through May 10, 2020 and represents almost 77 percent of the first-mortgage servicing market (38.3 million loans).