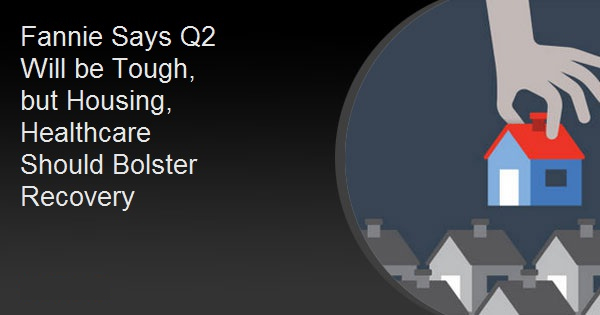 Fannie Says Q2 Will be Tough, but Housing, Healthcare Should Bolster Recovery

Fannie Mae's Economic and Strategic Research (ESR) group says it expects the U.S. gross domestic product (GDP) to decline by 35 percent (annualized) in the current quarter. The loss of 4.8 percent in the first quarter, the largest decrease in six years exceeded Fannie Mae's estimate of -3.3 percent because of a larger than anticipated slowdown in personal consumption expenditures (PCE), 40 percent of which, ironically, came from a decline in spending on healthcare because of delays or cancellations in elective surgeries because of the pandemic.

The plummeting growth expected in the second quarter will improve in the second half of the year, with healthcare at that point providing outsized support. As restrictions and social distancing measures are relaxed, the economists believe that an elevated savings rate, supportive monetary and fiscal policies, and pent-up demand will start to drive the economic recovery. Full-year 2020 GDP is expected to contract 5.3 percent, while 2021 growth is forecast to be at 5.2 percent.

The group sees many unknowns contributing to both downside and upside risks to their forecast. One is the way consumers will react as the economy reopens. Will they prefer to remain under quarantine in large numbers, limiting the upside potential for rebounding consumption? This could increase the magnitude of bankruptcies and permanent business closings. Another downside risk is the potential for a second, longer lasting or more severe than anticipated outbreak of the coronavirus later this year, possibly leading to renewed social distancing measures. Together, these risks could lead to a lower growth path.

The upside scenario is one in which the rebound from the coronavirus-driven declines in the first half of the year is more pronounced and rapid than currently expected. Fannie's baseline forecast assumes that GDP will not return to its pre-pandemic level until late 2022 or early 2023. However, if consumer and business confidence surges following the reopening of the economy and a combination of increased testing and coronavirus therapies emerges, a second round of illnesses may not dampen the recovery and a return to pre-coronavirus levels of GDP could be realized sooner.

Fannie Mae calls housing "a bright spot" in the first quarter. Residential fixed investment posted its largest annualized gain since 2012, but pandemic disruptions are now severely impacting the sector. Housing activity appears to have slowed earlier than expected; April existing sales fell 8.5 percent over March. Given that sales are recorded at the point of closing, the decline reflected contract signings in February or even January, prior to the March slowdown. It is plausible that some transactions were delayed into April as coronavirus-related distancing measures disrupted the buying process, but many deals may have fallen through at varying stages.

Some high frequency weekly data suggest a recent, modest firming of home purchase activity, but for the second quarter sales will probably decline about 31 percent. Low interest rates will persist, with the 30-year potentially falling below 3.0 percent late in the year. This, combined with expectations for recovery in employment, should support housing, but the year will probably see a 15 percent decline in sales compared to 2019.

According to Corelogic, new listings of single-family homes for sale were down 40 percent from April 2019 as would-be home sellers decline to list their homes due to infection concerns or belief that market conditions are unfavorable. The tightening of housing supply will likely help soften the downward pressure on home prices, even as sales volumes decline. Realtor.com says many sellers have been reluctant to cut prices, opting to take their homes off the market and wait for social-distancing measures to ease before considering price cuts.

In the long run, the limited supply of homes available, especially in the starter-home segment, should continue to support home building but it will probably decline sharply in the current quarter. Single-family housing starts fell 17.5 percent in March, to the lowest level in nearly a year, and residential construction employment declined in April. Similarly, new sales were off by 15.4 percent in March, the largest monthly decline since July 2013.

The National Association of Home Builders' Housing Market Index dropped sharply, posting the largest decline in builder confidence in the survey's 35-year history. Builders' current outlook and expectations for the next six months both fell to the lowest levels in nearly 8 years, and the Federal Reserve reported tightening of lending standards on construction and development loans. However, as is the case with recent high frequency data, some homebuilders have indicated an uptick in buyer interest in recent weeks. Because of prior data revisions, Fannie Mae has revised its forecast for new home sales and housing starts for the quarter; single-family starts will decline 10.1 percent and new home sales by 14.6 percent. Multifamily construction starts fell 31.7 percent in March and Fannie Mae expects they will be down more sharply this quarter than those for single-family homes. It forecasts a 43.5 percent 2nd quarter retreat and 10.5 percent for the whole year

Residential fixed investment in the second quarter is expected to fall over 50 percent on an annualized basis with some recovery in the second half of the year. It probably won't return to pre-crisis levels until 2022. A weaker job market and tightening of lending standards for homebuyers and builders relative to those at the start of 2020 will likely continue to be a drag on activity, even after virus concerns subside.

The Federal Reserve says banks reported a net tightening in lending standards for residential mortgages during the three months that ended in April, only the second quarter in six years that has happened. Jumbo loans, in particular, were affected while government loans were the only category with net loosening. Despite this tightening, banks reported strong demand for mortgage loans.

While the ESR Group expects mortgages rates to fall even further, heightened uncertainty about job security and disruptions to household wealth may lead potential homebuyers to be more wary of substantial, long-term financial commitments such as mortgages. It is also unclear at this point to what extent the use of forbearance agreements will limit future mortgage demand. Their forecast for purchase mortgage originations is largely unchanged from last month at a 2020 volume of $1.1 trillion, a decline of 15 percent from 2019, corresponding to the expected decline in home sales and starts. Those volumes should recover to $1.3 trillion in 2021 as housing activity improves. Meanwhile, their refinance originations forecast increased, with volumes reaching $1.5 trillion, $119 billion higher than the previous forecast and a level similar to 2012, when the last refinance boom occurred. While refinance applications have fallen of late (down 22 percent in April, according to the Mortgage Bankers Association), they remain at elevated levels; therefore, we expect the pipeline of refinances to continue in the near future. Refinance originations will decline to $1.2 trillion in 2021, unchanged from last month's forecast.