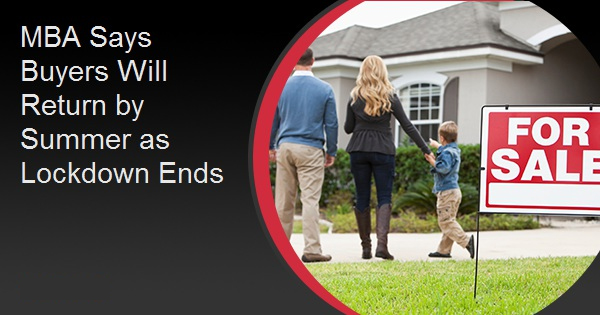 MBA Says Buyers Will Return by Summer as Lockdown Ends

The Mortgage Bankers Association (MBA) says applications for financing new home purchases were down 25 percent in April compared to March and by 12 percent year-over-year. This data from MBA's Builder Application Survey (BAS) does not include any adjustment for typical seasonal patterns.

"New home purchase applications severely weakened in April, which coincided with the peak of the social distancing efforts and restrictions on non-essential activities to help slow the spread of COVID-19," according to Joel Kan, MBA's Associate Vice President of Economic and Industry Forecasting. "During what's typically the prime home buying season, activity fell 25 percent from March and decreased 12 percent from a year ago," he said. "MBA estimates that new home sales dropped to an annualized pace of 533,000 units - the slowest since December 2016. This decline was in line with data from our Weekly Applications Survey, which indicated a pullback in March and most of April."

Added Kan, "There's evidence now that unrealized, pent-up demand is being released as states start to reopen. We expect that heading into the summer, more prospective homebuyers will gradually return to the market."

By product type, conventional loans composed 62.0 percent of loan applications, FHA and VA loans had 23.3 percent and 13 percent shares respectively and 1.2 percent were RHS/USDA loans. The average loan size of new homes decreased from $344,556 in March to $334,641 in April.

The BAS tracks application volume from mortgage subsidiaries of home builders across the country. Official new home sales estimates are conducted by the Census Bureau on a monthly basis with sales recorded at contract signing. This is typically coincident with the submission of a mortgage application. April new home figures will be published on May 26.