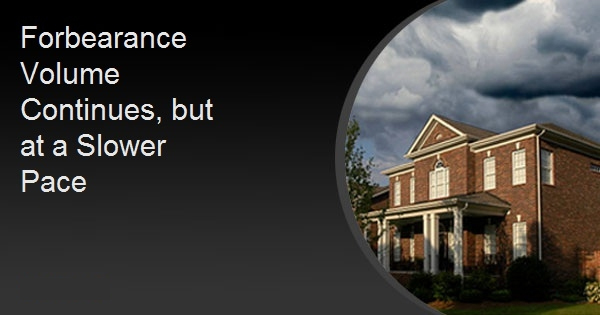 Forbearance Volume Continues, but at a Slower Pace

In its May 5 report on the number of COVID-19 forbearance plans in effect, Black Knight said the rate of new plans had slowed, but speculated they could pick up again as the May mortgage payments came due. As of May 12, that had not happened. The company reports that the number of plans had increased from a revised 4.5 million to 4.7 million.

That increase, a net of just under 26,000 new plans per day, is a substantial reduction of more than 85 percent of the daily rate in early April. However, as most mortgage documents allow a 15-day grace period before a mortgage is marked as past due and a late fee assessed, borrowers still had a few days remaining at the end of the reporting period to request forbearance before any penalty kicked in.

Black Knight used a momentum-based approach based on the one-week average and assuming an optimistic 10 percent daily decline moving forward. It concluded there would be 4.9 million forborne loans by the end of May, 9.2 percent of active mortgages, and just under 5 million or 9.4 percent by the end of June. A more pessimistic scenario assumes that the current pace continues until mid-June and then a 10 percent daily slowdown begins. This could result in up to 5.4 million loans in forbearance by the end of May and 6.3 million by the end of June; 10.1 percent and 11.8 percent respectively of all mortgages being serviced.

The number of forbearance plans reported this week represents 8.8 percent of all active mortgages and more than $1 trillion in unpaid principal. Some 7% of all GSE-backed loans and 12.4% of all FHA/VA loans are currently in forbearance plans.

Given the current number of loans with approved plans, servicers are obligated to advance an aggregate of $3.6 billion in principal and interest (P&I) payments to investors in government guaranteed mortgage backed securities associated with these loans and another $2.1 billion in payments for property taxes and insurance premiums (T&I). They could also have an additional $2.8 billion in advance P&I and T&I payments for loans they are servicing for others.