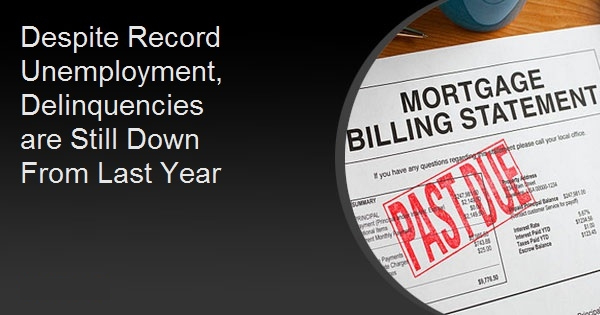 Despite Record Unemployment, Delinquencies are Still Down From Last Year

The national delinquency rate rose significantly in the first quarter of 2020, driven largely by a surge in the early stage rates. The Mortgage Bankers Association said the rate of loans on one-to-four-unit residential properties rose 59 bps (bps) compared to the fourth quarter of 2019 to a seasonally adjusted rate of 4.36 percent of all loans. This was still 6 bps lower than the rate in the same quarter of last year. The delinquency rate includes loans that are at least one payment past due but does not include loans in the process of foreclosure

By loan type, the total delinquency rate (which includes 30-day, 60-day, and 90-day or more past due) for conventional loans increased 34 bps to 3.16 percent over the previous quarter, the FHA rate was up 131 bps to 9.69 percent and the VA rate rose 101 bps to 4.65 percent. The FHA and VA rates were the highest since the fourth quarter of 2017 and the first quarter of 2015, respectively.

"The mortgage delinquency rate in the fourth quarter of 2019 was at its lowest rate since MBA's survey began in 1979,´ Marina Walsh, MBA's Vice President of Industry Analysis, said. "Fast-forward to the end of March, and it is clear the COVID-19 pandemic is impacting homeowners. Mortgage delinquencies jumped by 59 bps - which is reminiscent of the hurricane-related, 64-basis-point increase seen in the third quarter of 2017. The major variances from the fourth quarter of 2019 to this year's first quarter are tied to the increase in early-stage delinquencies for all loan types. For example, the 30-day FHA delinquency rate rose by 113 bps, the second-highest quarterly ramp-up in the survey series. The 30-day VA delinquency rate rose by 78 bps - the highest quarterly increase."

The seriously delinquent rate in the first quarter decreased by 9 bps and was down 29 bps from a year ago. The foreclosure inventory rate - the percentage of loans in the foreclosure process - was at its lowest level last quarter since 1984, 0.73 percent, down 5 bps from the fourth quarter of 2019 and 19 bps lower than one year ago. Foreclosure starts were down 2 bps from the previous quarter to 0.19 percent.

According to Walsh, there may be a flattening in foreclosure starts in future quarterly surveys due to COVID-19-related foreclosure moratoria and borrower forbearance guidelines under the CARES Act. Almost 4 million homeowners are on forbearance plans as of May 3, but MBA's survey asks servicers to report these loans as delinquent if the payment was not made based on the original terms of the mortgage - in the same manner that delinquency data is collected during natural disasters.

"Once foreclosure moratoria are lifted and forbearance periods end, borrower repayment and modification options, combined with year-over-year equity accumulation and home-price gains, may present alternatives to foreclosure for the millions of distressed homeowners affected by this unfortunate pandemic and economic crisis," added Walsh.

It is indicative of how solid loan performance has been in recent years that, despite the first quarter spike, total delinquencies were still down on an annual basis. There were differences by loan type however, with the rate up by 76 bps year-over-year for FHA and 28 bps for VA loans while conventional loan delinquencies declined by 30 bps