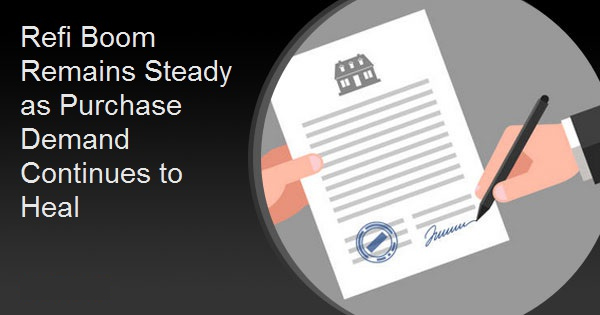 Last week was yet another good one for purchase mortgage activity and refinancing, while continuing to fade, was still at double its pace of a year ago. The Mortgage Bankers Association (MBA) said the upshot was a slight increase in its Market Composite Index, a measure of mortgage loan application volume. It gained 0.3 percent on a seasonally adjusted basis from one week earlier and was 1 percent higher on an unadjusted basis.

The volume of purchase applications gained 11 percent compared to the previous week on both an adjusted and an unadjusted basis. It was the fourth straight weekly increase in the Purchase Index although it remains 10 percent below its level a year earlier.

"There continues to be a stark recovery in purchase applications, as most large states saw increases in activity last week. In the ten largest states in MBA's survey, New York - after a 9 percent gain two weeks ago - led the increases with a 14 percent jump. Illinois, Florida, Georgia, California and North Carolina also had double-digit increases last week," said Joel Kan, MBA's Associate Vice President of Economic and Industry Forecasting. "We expect this positive purchase trend to continue - at varying rates across the country - as states gradually loosen social distancing measures, and some of the pent-up demand for housing returns in what is typically the final weeks of the spring home buying season."

Added Kan, "Mortgage rates stayed close to record-lows, but refinance applications decreased for the fourth consecutive week, driven by a 5 percent drop in conventional refinances. Despite the downward trend over the last month, mortgage lenders remain busy. Refinance activity was up 200 percent from a year ago."

The average contract interest rate for 30-year fixed-rate mortgages (FRM) with loan balances at or below the conforming limit of $510,400 increased to 3.43 percent from 3.40 percent, with points decreasing to 0.29 from  0.30. The effective rate increased.

The rate for 30-year FRM with loan balances exceeding the conforming limit was unchanged at 3.69 percent. Points dipped to 0.33 from 0.34, bringing the effective rate lower.

Both the contract and the effective rate for 30-year FRM backed by the FHA were unchanged, with the contract rate at 3.37 percent. Points did increase to 0.21 from 0.20.

The average contract interest rate for 15-year FRM decreased to 2.92 percent from 2.93 percent, with points decreasing to 0.28 from 0.29. The effective rate decreased from last week.

The 5/1 adjustable rate mortgages (ARMs) posted a 6-basis point increase in its contract rate to 3.26 percent but a drop in points from 0.36 to 0.04 brought the effective rate down. The ARM share of activity decreased to 2.9 percent of total applications from 3.0 percent a week earlier.

MBA also reported that, as of May 3 the total number of loans in forbearance had increased from 7.54 percent of servicers' portfolio volume in the prior week to 7.91 percent. Nearly 4 million homeowners have sought relief.

Mike Fratantoni, MBA's chief economist, said, "Although the pace of forbearance requests slowed this week, call volume picked up - which could be a sign that more borrowers are calling in to check their options now that May due dates have arrived."

MBA's Weekly Mortgage Applications Survey been conducted since 1990 and covers over 75 percent of all U.S. retail residential applications Respondents include mortgage bankers, commercial banks, and thrifts.  Base period and value for all indexes is March 16, 1990=100 and interest rate information is based on loans with an 80 percent loan-to-value ratio and points that include the origination fee. The Forbearance and Call Volume Survey covers the period from April 27 through May 3, 2020 and represents almost 77 percent of the first-mortgage servicing market (38.3 million loans).