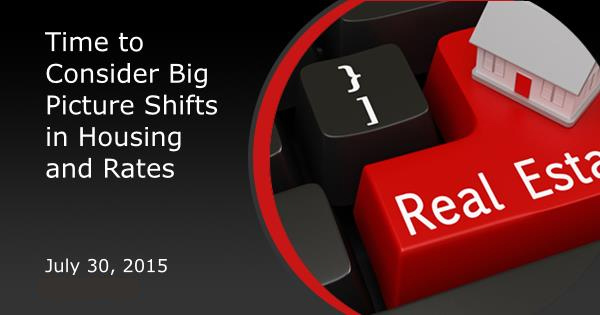 Time to Consider Big Picture Shifts in Housing and Rates

These same forces that conspire to create the current reality for this week’s housing news are also arguably behind a noticeable pause in 2015’s previously forceful move toward higher rates. Through the end of June, the mortgage rate situation had actually been rather alarming. It could go back to being alarming, of course, but for now, we’re seeing more and more evidence that the move has leveled off.

Mortgage rate movement is a paradoxically simple topic so far this year. It’s not unfair to say that rates began to move higher because of how low they were. That’s the simple part, but the facts that underlie it are a bit more complex.

We can be fairly confident that the low rates seen at the end of January in the US resulted primarily from Europe’s extended courtship process with quantitative easing (QE). In other words, the European Central Bank had long wanted to buy government bonds, just like the Fed did in the US, but had trouble getting the idea through the much more complicated political side of the European economy. As 2014 progressed, the consensus began to shift in favor of European QE happening.

QE means huge, guaranteed buying of government bonds from a player with few of the same profit considerations that the rest of the market has. Such guaranteed buying pushes the price of bonds higher, which, in turn, pushes rates lower. In principle, the idea is to encourage banks to lend and to lower the cost of credit to consumers, thus stimulating the economy and helping avoid disinflation.

In practice, the effects are debatable. There’s no great way to measure the efficacy because it’s impossible to know how things would have gone with no QE. One thing we HAVE been able to observe is that when markets know it’s coming, they do their best to get ahead of it. After all, if you bought and sold oranges for a living and you knew a huge buyer of oranges was coming to market, and was committed to buying a predetermined amount of oranges at whatever price was asked, what would you do? Probably try to buy as many oranges as you could between now and then, right?

That’s exactly what has happened time and again in financial markets as central banks have telegraphed their bond buying plans. In the case of Europe, it was even more telegraphed over an even longer period of time than it ever had been in the US. This created a frenzy of bond buying in Europe, and because global financial markets are interconnected, rates in the US ended up benefiting as well.

February-April were the months where the cards hit the table in terms of this dynamic. Europe started buying in March, and while the initial flood of capital pushed rates even lower, there were no longer massive amounts of buyers interested in getting ahead of the central bank. Now they just wanted to sell their oranges! When combined with the Fed’s persistent message that it intends to raise rates sometime this year, it made perfect sense for rates in the US to head higher with European rates.

Although that move was sharp, markets quickly began to question how well the economy could sustain a continued push toward higher rates—especially considering the difficulty that lower income earners face when it comes to buying homes. Just this week, we see news that the home ownership rate continues to plummet and now stands at the lowest level since 1967. Additionally, rental vacancies are at the lowest levels since the Census Bureau began tracking the data.

Another side effect of the conflicting central bank policies (where Europe is easing and the Fed is tightening) is that the dollar has become very strong versus many foreign currencies. This is good in some ways and bad in others. One of the downsides is that foreign investors are no longer seeing as much value in US real estate.

Home prices are another spoke on this same wheel. When first time and/or low-income homebuyers have a hard time affording or qualifying for a mortgage, investors gladly step in and buy properties for the sole purpose of renting them out. The economics behind that make it a feasible option up until rates or prices get to a certain point. The rising rates so far in 2015 have thus put pressure on prices in some markets. There hasn’t been any major shift, but things have been changing enough for S&P to say that “the rate of home price increases is more likely to slow than to accelerate” over the next 2 years.

On a final note, higher prices and higher rates are potentially starting to be seen in sales themselves. After an impressive recent run, Pending Home Sales finally declined this month, as did New Home Sales. Of course, one month of ‘shifty’ data doesn’t mean trends have necessarily shifted, but given the confluence of all the factors discussed, it’s certainly something to keep an eye on. The silver lining is that the uncertainty for future growth prospects is a benefit for mortgage rates—at least relative to where we were in June.