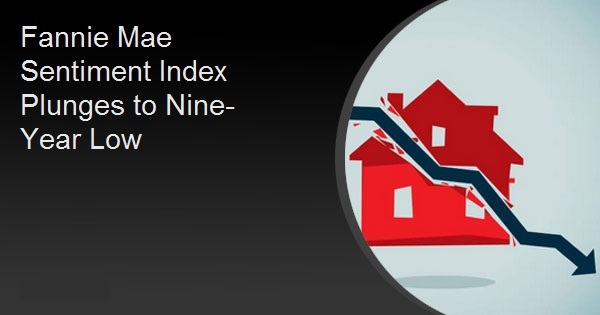 Fannie Mae's Home Purchase Sentiment Index (HPSI) plummeted 17.8 points in April. Combined with its 11.7-point loss in March the Index is at 63.0, its lowest reading since November 2011. Several of its components are now in net negative territory.

The HPSI is calculated from responses to six questions from the monthly National Housing Survey (NHS). Five of the components dropped compared to the previous month, four of them by double digits.

The most dramatic change was in the answers to the question of whether it is a good time to sell a home. Those who said no rose from 36 percent in March to 65 percent while positive responses went from 52 to 29 percent. As a result, the net positive share decreased 52 points from March and 79 points compared to a year earlier. When asked for their reasons for their responses, the majority of survey participants cited unfavorable economic conditions Opinions about buying a home were more positive, almost identically split between a good time and a bad time, with a net positive of 2.0 percent on the "good" side. This is down 18 points from March and 12 year-over-year.

Also falling into negative territory at a net of -11 percent was the share of respondents who think prices will go up over the next 12 months. This is down 28 points from March and 47 points compared to April 2019.

While more than half of respondents continue to report their income as stable over the last 12 months, those reporting higher income dropped and those reporting lower incomes rose, resulting in a net of 1 percent on the lowered income side, down 17 points for the month.

Surprisingly, lack of concern over losing a job remained high at 76 percent, although down from the high 80 percent level it has occupied for several years. After jumping 10 points in March, the share of those who were concerned about their jobs remained at 23 percent for a net of 53 percent.

The one net positive response that rose was those who expected further reductions in interest rates. It rose 9 points to a net of -9 percent.

"The HPSI experienced another unprecedented decline in April, falling to its lowest level since November 2011," said Doug Duncan, Senior Vice President and Chief Economist. "The 17.8-point decrease reflected consumers' deepening concerns about both their incomes and the housing market. Attitudes about whether it's a good time to sell a home fell most sharply, dropping an additional 23 points this month. Individuals' heightened uncertainty about job security, as registered in the survey over the last two months, is likely weighing on prospective homebuyers, who may be more wary of the substantial, long-term financial commitment of a mortgage. On average, consumers expect home prices to fall 2 percent over the next 12 months, the lowest expected growth rate in survey history. While consumers did grow more pessimistic in April about whether it's a good time to buy a home, low mortgage rates remain a driver of purchase optimism. We expect that the much steeper decline in selling sentiment relative to buying sentiment will soften downward pressure on home prices."

While it is not a component of the HPSI, when asked whether the economy is on the right or the wrong track, opinions abruptly reversed over the last two months. Right track responses fell from 61 percent in February to 34 percent in April and wrong track responses shot up 20 points to 53 percent.

The NHS, from which the HPSI is constructed, is conducted monthly by telephone among 1,000 consumers, both homeowners and renters. In addition to the six questions that are the framework of the index, respondents are asked questions about the economy, personal finances, attitudes about getting a mortgage, and questions to track attitudinal shifts.