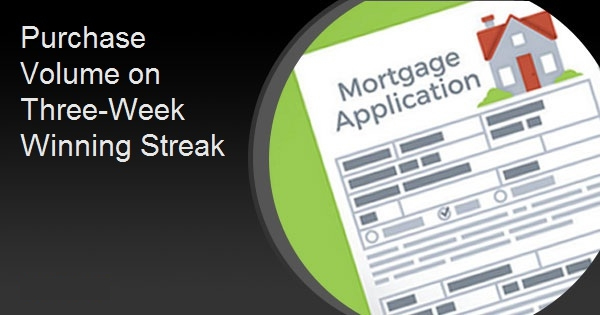 Applications for purchase mortgages increased for the third straight week, keeping overall activity during the week ended May 1 virtually unchanged from the previous week. Refinancing, while drifting lower, still provided the largest share of the market.

The Mortgage Bankers Association (MBA) said its Market Composite Index, a measure of loan application volume, increased 0.1 percent on a seasonally adjusted basis from one week earlier and was up 1 percent on an unadjusted basis. Purchase applications rose 6.0 percent after seasonal  adjustment. The unadjusted index was 7.0 percent higher than the previous week but was down 19 percent year-over-year.

Refinancing accounted for 70.0 percent of applications during the week compared to 71.6 percent during the week ended April 24, but the Refinancing Index slipped by 2.0 percent. Volume, however, was still more than twice that of the same week in 2019.

"Mortgage application volume was unchanged last week, even as the 30-year fixed rate mortgage declined to 3.40 percent - a new record in MBA's survey," said Mike Fratantoni, MBA's Senior Vice President and Chief Economist. "Despite lower rates, refinance applications dropped, as many lenders are offering higher rates for refinances than for purchase loans, and others are suspending the availability of cash-out refinance loans because of their inability to sell them to Fannie Mae and Freddie Mac."

Added Fratantoni, "Purchase volume increased for the third week in a row, led by strong growth in Arizona, Texas and California. Although purchase activity remains almost 19 percent below year-ago levels, this annualized deficit has decreased as more states reopen amidst the apparent, pent-up demand for homebuying."

Looking at the impact at the state level, here are results showing the non-seasonally adjusted, week-over- week percent change in the number of purchase applications from Washington, California and New York, three states that have been hit hard by the COVID-19 pandemic.

Interest rates moved lower on both a contract and effective basis for fixed-rate mortgage products. The average contract rate for 30-year fixed-rate mortgages (FRM) with loan balances at or below the conforming limit of $510,400 decreased to 3.40 percent from 3.43 percent, with points decreasing to 0.30 from  0.34.

The rate for jumbo 30-year FRM, loans with balances exceeding the conforming limit. decreased to 3.69 percent from 3.72 percent. Points ticked up to 0.34 from 0.33.

Thirty-year FRM with FHA backing had an average rate of 3.37 percent, down from 3.39 percent the prior week. Points were unchanged at 0.20.

The contract rate for 5/1 Adjustable rate mortgages (ARMs) also declined, falling 9 basis points to 3.20 percent. However, a jump in points, from 0.00 to 0.36, sent the effective rate higher. The ARM share of activity increased to 3.0 percent from 2.9 percent of total applications the previous week.