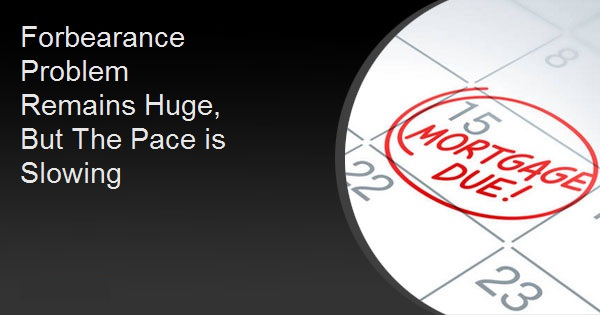 Forbearance Problem Remains Huge, But The Pace is Slowing

The Mortgage Bankers Association (MBA) has confirmed the findings that Black Knight reported on Monday morning that, while the number of forbearances in effect as a result of the COVID-19 pandemic continues to rise, the rate of increase slowed as April progressed. MBA said its weekly survey found the number of loans in a forbearance plan increased from 6.99 percent of loans being serviced on April 19 to 7.54 of the total as of April 26. MBA estimates that 3.80 million homeowners are now in forbearance.

"The share of loans in forbearance increased once again in the last full week of April, but the pace of new requests slowed," said Mike Fratantoni, MBA's Senior Vice President and Chief Economist. "With millions more Americans filing for unemployment over the week, the level of job market distress continues to worsen. That is why we expect that the share of loans in forbearance will continue to grow, particularly as new mortgage payments come due in May."

Black Knight said in its Mortgage Monitor that the number of new forbearances put in place in the third week of April and thereafter were at about the quarter of the rate as early in the month but said it too expected an increase when May mortgage payments came due. Requests for forbearance slowed for the third consecutive week, dropping from 1.14 percent to 0.63 percent. Hold time for phone calls fell from an average of 5.0 minutes to 2.4 minutes and abandonment rates decreased from 9.9 percent to 5.8 percent.