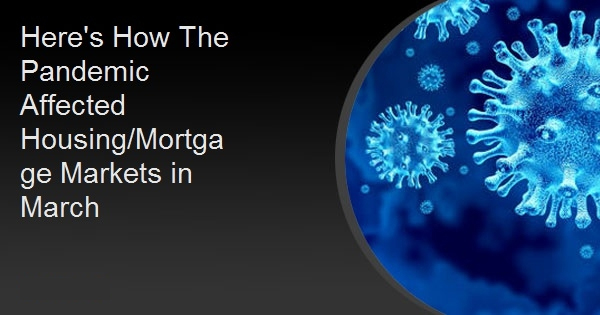 Here's How The Pandemic Affected Housing/Mortgage Markets in March

Black Knight's new Mortgage Monitor restates some of the statistics on COVID-19 related forbearance plans it released late last week - i.e. that the number of those plans had reached 3.8 million by April 30. But it makes one additional point. The number of plans being put in place started to taper down as the middle of the month approached. Between April 21 and April 30, the number of plans enacted each day varied between 53,000 and 102,000. This is less than a quarter of the daily number seen at the beginning of the month. Since servicers typically charge late fees after the 15th of the month it might indicate that borrowers are being both proactive and strategic in contacting their servicers.

Black Knight says it remain to be seen if the same type of spike occurs at the beginning of May, but under an optimistic scenario in which daily forbearance volumes continue to decline by 10 percent per day, we would see a peak of 4.5 million plans in place over the coming months. But if current volumes continue through mid-June, that number could spike to 8 million or 16 percent of active mortgages. With servicers contractually required to forward principal and interest payments to investors in mortgage-backed securities whether or not the borrower is making payments, the servicers of Fannie Mae and Freddie Mac's (the GSE's) loans will have to advance about $4 billion a month under the more pessimistic scenario. The GSE's conservator, the Federal Housing Finance Agency, has capped the servicers' advance payment requirement at four months, but that would still be a $16 billion obligation.

As Black Knight Data & Analytics President Ben Graboske said, "What remains an open question at this point is to what degree forbearance requests will look like at the beginning of May - when the next round of mortgage payments become due, and with nearly 30 million Americans newly unemployed in the last month. Once we have a sense for whether there is a similar spike in forbearance requests around the beginning of May, we'll be in a much better position to more accurately forecast possible scenarios."

The Monitor also looked at the impact of the pandemic on other aspects of real estate. In-person home showings cratered early in April as more and more states, businesses, and individuals began to react to the epidemic and take precautions to mitigate risks. At one point Black Knight found agent showings were down 63 percent compared to last April, but in some areas they began to pick up after mid-month. By the end of the month were still down, but by "only" 43 percent.

The improvement is highly variable by location. In New York, the state that had been hardest hit by illness, showings remain down by 87 percent and in Colorado, where they are actually banned, the annual decline is 94 percent. Texas, however, has only dropped 22 percent and in California and Florida - both of which are in the top five of virus-affected states, showings have begun to increase although they are still off by 54 and 46 percent, respectively. On-line real estate searches are recovering as well. They fell by 37 percent nationally but have increased by 20 percent over the past three weeks to a 24 percent annual deficit.

The decline in new real estate listings has begun to level off as well, but by the third week of April they were still down by 70 percent from the previous year. Home prices reflected in recent closed sales continued to rise in late March and early April, reflecting earlier contracts as well as the record-low interest rates.

The median price of those homes that have been listed in recent weeks have begun to decline and the gap between list prices and sale prices has tightened. The shrinking delta between the two could mean that sale prices could begin to experience downward pressure, or it may mean sellers are pricing more aggressively in the current uncertain climate.

Black Knight says we may eventually see these trends in real estate viewings reflected in other metrics such as transaction volumes, purchase lending, even home prices.

Black Knight looked at purchase lending through the volume of rate locks and found those had also plummeted in the early weeks of the crisis, down about 70 percent. Those too began rebound in late April and are now down from their March peaks by about 50 percent. However, if one assumes that those April locks are to close in May, the result could be about $70 billion in lost purchase closing during that month. The rate of prepayments, usually an indicator of refinancing, increased 54 basis points in  March, the largest single month surge in 15 years, and the single-month mortality (SSM) rate of 1.89 percent was the highest in seven years. The GSEs had the largest month-over-month increase at 45 percent and loans originated in 2016 and 2017 saw their rates grow by 50 percent. But despite the SSM rate, near record low interest rates, and huge numbers of potential refinancing candidates, refinance rate locks in April were nearly 80 percent below their early March peaks.

Lenders are still dealing with pipelines chock full of refinances and are concentrating on closing those loans. There is also the risk that borrowers could lose their jobs before their loan closes and can be sold into the secondary market. Thus, even as the Federal Reserve's massive buying has calmed secondary market volatility, lenders are not anxious to be drumming up new business and spreads have climbed from an average of 1.38 percent in January and February to 1.95 percent since late March. This is keeping homeowners from realizing the full impact of falling secondary market rates. If the pipelines clear and the risk becomes less worrisome, lenders may make room for more downward movement in 30-year rates, proving additional refinance incentive. What remains to be seen is what impact current unemployment and rate-lock activity will have on runoff risk and refinancing .

Black Knight says that some part of the more than 14 million homeowners who might have qualified for and benefited from refinancing in early March might be among the 30 million new unemployed, but this doesn't seem to explain the lack of rate locks. The degree to which refinance incentive and indications homeowners are moving forward to do so has come uncoupled is making it