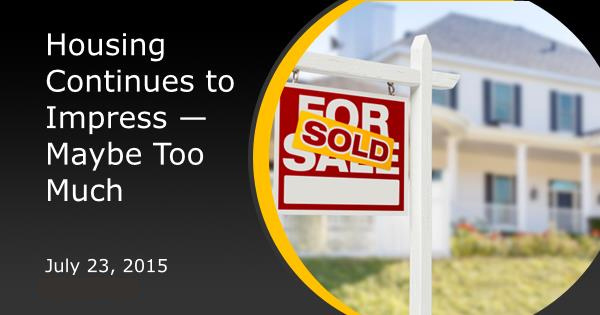 Housing Continues to Impress — Maybe Too Much

Thanksgiving, Spring Break, or Christmas are the likely candidates for the busiest travel times of the year, right?  While that would stand to reason, the reality is that busiest travel day of the year is usually a Friday in July.  In fact, several summertime weekends are usually bigger travel weekends than any in the aforementioned list of usual suspects.

The theme of "out of office" has been dominating financial markets lately, resulting in narrow ranges, and a lack of major momentum. That’s not a bad thing at the moment though. 7 out of the last 8 days have seen mortgage rates move very slightly lower.

It continues to be the case that rates markets are fighting to put their weakest days of 2015 behind them, with July’s highest rates still falling just under June’s (which were the highest in 2015). The more that ground is held, the more real the opportunity becomes for a bigger move lower. That’s significant because until this week, the broader trend was still arguably skewed toward higher rates in 2015.

Recent headlines help to understand why the high level of consensus on higher rates is starting to break down. For instance, the IMF and World Bank have both called the Fed’s rate hike aspirations into question in light of the potential effects on the global economy. They reckon that an ongoing appreciation in the dollar causes undue stress on emerging markets due to certain countries’ holdings of foreign debt (meaning that domestic currency devaluation increases the cost of making payments on foreign debt).

The bottom line is that the Fed is really the only Central Bank in town talking about raising rates, and critics of that thesis are speaking up. While the Fed Funds rate does not directly dictate mortgage rates, a lower Fed rate means “cheap short term money.” And investors have been using that cheap short term money to invest in longer term money (like mortgage rates), thus creating an indirect connection between Fed Funds and mortgage costs.

Some would argue that it’s high time for the Fed to hike rates, and they’re pointing to potential overheating in the Housing Market. Just this week, Existing Home Sales came in at the highest levels since 2007. More to the point, median Existing Home Prices set a new, all-time record high. In separate data, Redfin noted that the incredible run in home price appreciation is finally causing some exhaustion in terms of buyer behavior. They say that while there are still many markets where competition is fierce, others have started showing signs that they’re leveling off in terms of prices.

Does that mean we’re standing at the edge of another housing bubble? Thankfully, that’s highly unlikely due to fundamental differences between the current environment and that of 2005-2007. That’s not to say that home sales and prices couldn’t see a moderate correction in the coming months, or even a general downturn for a year or two, but the ingredients aren’t there for another big meltdown. Back then, home sales and prices had risen, essentially unchecked for more than 10 straight years. Sales peaked at an annual pace that was 1.5 million units higher than today’s pace. For perspective, we’ve only just now made it back to 2001’s levels.

The lending environment is even more dissimilar. Make no mistake that this has nothing to do with feel-good regulations and restrictions. Lenders were simply too badly burned by the meltdown and not interested in making the same mistakes. While there are some lenders out there who are offering more aggressive underwriting, there are not hundreds of other investors buying chunks of those lenders’ portfolios sight unseen.

It was that “hear no evil, see no evil” component of the pre-meltdown era that did more than anything to accelerate the destruction. We just don’t have the same thing today. If anything, lenders could stand to loosen up just a bit more. That doesn’t mean that new guidelines need to be written, necessarily. Rather, existing guidelines need to be able to be used AS WRITTEN by more lenders. As it stands, most of them err on the side of caution in interpreting guidelines and applying overlays (lenders’ own additional layers of underwriting guidelines, based on their own risk preferences). That’s largely due to an overabundance of regulation.

The pace picks up next week, in contrast to this week’s summertime slowness. There are several significant economic reports, including GDP and Durable Goods. Then on Wednesday, the Fed releases a policy announcement in the afternoon. While this isn’t the meeting where we’ll see the Fed hike, investors will be on the lookout for clues that policy is evolving in that direction.