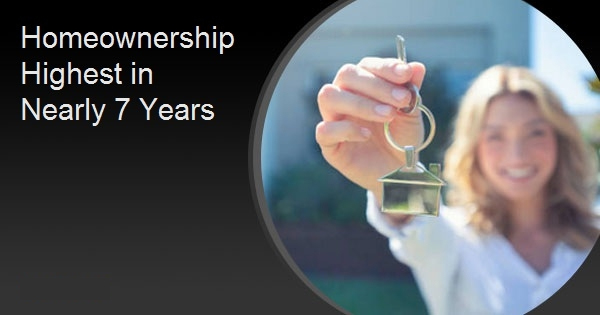 The rate was highest in the Midwest at 69.2 percent and lowest in the West at 60.1 percent. All four regions experienced annual increases.

Homeownership was higher for all age cohorts that a year earlier and was, as usual,  highest among the oldest households, those 65 years and older at 78.7 percent, an 0.2-point increase. Those under 35 years of age had the lowest rate at 37.3 percent, but that was a 1.9-point annual gain. Those 35 to 44 years of age are at 61.5 percent, the next older group is at 70.3 percent and households between that ages of 55 to 64 have a 76.3 percent rate.

The gap between rates for "non-Hispanic white alone" households and other racial and ethnic groups closed slightly. "Black alone" homeownership increased from 41.1 percent in the first quarter of 2019 to 44.0 percent, the largest increase of any group. Hispanic homeownership rose from 47.4 percent to 48.9 percent while that for all other races ticked up from 53.9 percent to 56.0 percent. The rate for white households gained only a half point to 73.7 percent.

The vacancy rates for both owned and rental housing were down from the first quarter of 2019. The rate of rental vacancies fell from 7.0 percent to 6.6 percent and homeowner vacancies from 1.4 to 1.1 percent.

The number of housing units grew by 1.15 million to 140.36 million year-over-year with 124.40 million of those units occupied, an increase of over 2 million. The number of rental units declined by 640,000. Owner units accounted for 57.0 percent of occupied units and rental units composed 30.7 percent of the total.