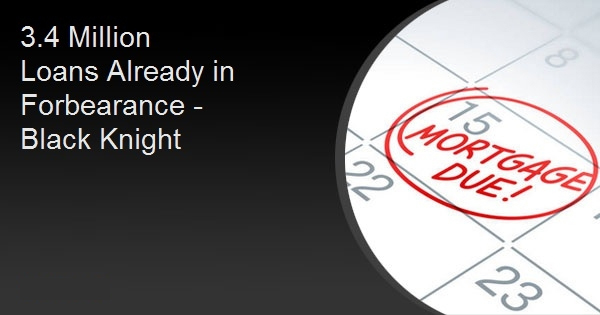 March is typically the strongest month of the year for mortgage performance, probably because, according to Black Knight the receipt of tax refunds allows delinquent borrowers to catch up on their payments. However, last month the delinquency rate rose 3.39 percent, the first time they have increased in March since the turn of the century. Not even during the Great Recession was there a March uptick.

The company says that forbearances are included in its statistics as delinquencies even though, under the CARES Act, they are not reported as such to the credit bureaus. Along with its regular "First Look" at mortgage performance, Black Knight also updated its daily forbearance tracking.

The number of mortgages that were 30 days or more past due but not in foreclosure reached 1.8 million in March, an increase of 55,000 from February. Despite the 3.39 percent change, those delinquencies were down 7.25 percent compared to March 2019.

There were 17,800 foreclosure starts during the month, a 30.48 percent annual reduction, and also the lowest number on record. Black Knight says that, with a COVID-19 foreclosure moratorium in place, that number should continue to decline. The number of properties in the pre-foreclosure inventory was 220,000, 44,000 fewer than in March 2019.

Reflecting the increase in early delinquencies, the total number of non-current loans in March was 2.13 million, a gain of 37,000 loans month-over-month.

Prepayments jumped by nearly 40 percent in March, driven by record-low 30-year mortgage rates earlier this year. Of course, stay-at-home orders, economic uncertainty and unemployment are all likely to impact these numbers moving forward as well.

Black Knight said its McDash Flash Forbearance Tracker found that, as of April 23, more than 3.4 million mortgages, 6.4 percent of the total, are in forbearance agreements. This is up from 2.9 million a week earlier. These loans represent $754 billion in unpaid principal.

Of the total, 1.573 million loans are backed by Fannie Mae or Freddie Mac (the GSEs) and represent 5.6 percent of the GSE servicing portfolio. There are 1.071 million FHA loans in forbearance, 8.9 percent of that total.

Servicers are contracted to advance $2.8 billion of principal and interest payments  per month to holders of government-backed securities on COVID-19-related forbearances and another $1.3 billion for the estimated 740,000 portfolio-held or privately securitized mortgages.

The Federal Housing Finance Agency (FHFA) announced earlier this week that servicers of GSE loans will have a four-month limit on those advances. This could still mean a $7 billion obligation just on those loans currently in forbearance.

Black Knight CEO Anthony Jabbour, said the FHFA announcement provides the industry with some much-needed clarity. "Having an end date - four months - on the period in which servicers need to advance principal and interest payments on behalf of homeowners in forbearance is extremely helpful to our servicing clients," he said "Still, even knowing that time limit, with today's number of forbearance plans, servicers are still looking at more than $7 billion dollars in advances over those four months. And the forbearance numbers are climbing steadily, day by day. Clearly, this remains a challenging situation all around."

Black Knight will take a more in-depth look at the March mortgage performance data in its Mortgage Monitor. It will be released on May 4.