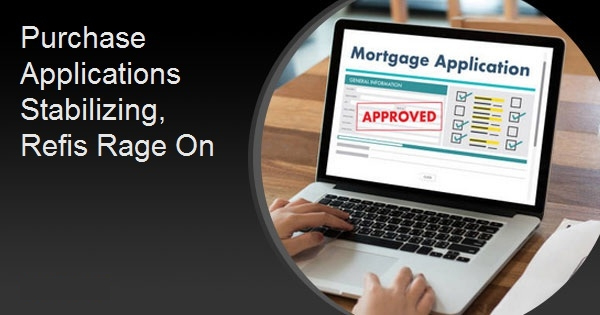 Purchase application volume was up slightly last week, the first gain since early March. Refinancing and overall volume, however, were flat.

The Mortgage Bankers Association said its Market Composite Index, a measure of volume, decreased 0.3 percent on a seasonally adjusted basis during the week ended April 17. On an unadjusted basis it rose 0.1 percent.

The seasonally adjusted Purchase Index rose 2.0 percent compared to the previous week and 3.0 percent unadjusted, but purchase mortgage activity was 31 percent lower than the same week in 2019.

The Refinance Index was down 1.0 percent from its level during the week ended April 10 but was 225 percent higher year-over-year. The refinance share of mortgage activity decreased to 75.4 percent of total applications from 76.2 percent the previous week.

Joel Kan, MBA's Associate Vice President of Economic and Industry Forecasting, said, "Mortgage applications were essentially unchanged last week, as a slight drop in refinance activity was offset by a 2 percent increase in purchase applications. California and Washington, two states hit hard by COVID-19, saw another week of rising activity - partly driving the overall increase. Despite the weekly gain, the purchase index remained close to its lowest level since 2015, and was over 30 percent lower than a year ago. The pandemic-related economic stoppage has caused some buyers and sellers to delay their decisions until there are signs of a turnaround. This has resulted in reduced buyer traffic, less inventory, and March existing-homes sales falling to their slowest annual pace in nearly a year."

Added Kan, "Despite the 30-year fixed rate remaining at a record low in MBA's survey, the refinance index dropped slightly last week but remained close to its 2013 highs. Borrowers continue to take advantage of low rates to gain some monthly savings, which is a welcome reprieve during these tough economic times."

Looking at the impact at the state level, here are results showing the non-seasonally adjusted, week over week percent change in the number of purchase applications from Washington, California, and New York:

With the exception of FHA-backed loans, contract interest rates were little changed from the prior week. Effective rates were mixed.

The average contract interest rate for 30-year fixed-rate mortgages (FRM) with loan balances at or below the conforming limit of $510,400 was unchanged at 3.45 percent with 0.29 point. The effective rate increased from last week.

The average contract interest rate for 30-year FRM backed by the FHA decreased 12 basis points to 3.33 percent. Points were unchanged at 0.19 and the effective rate declined.

The average contract interest rate for 15-year FRM decreased to 3.03 percent from 3.04 percent, with points increasing to 0.33 from 0.27.  The effective rate moved higher.

The average contract interest rate for 5/1 adjustable rate mortgages (ARMs) decreased to 3.29 percent from 3.34 percent, with points decreasing to -0.15 from 0.35  The effective rate decreased from last week. The adjustable-rate mortgage (ARM) share of activity increased to 2.8 percent of total applications from 2.7 percent the previous week.