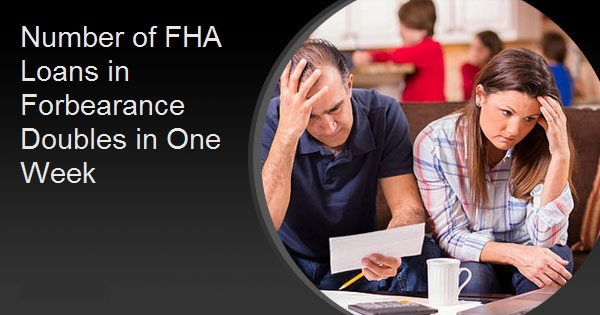 Number of FHA Loans in Forbearance Doubles in One Week

There are now two entities tracking forbearance statistics on a regular basis, the Mortgage Bankers Association (MBA) and Black Knight. The information they are providing is critical, and we did summarize both reports last week, but covering both is probably overkill. Until one report proves to be measurably more informative than the other or we find a way to combine the information, we will probably switch back and forth between the two. This is the MBA report from its Forbearance and Call Volume Survey conducted for the April 6 to April 12 period.

The number of loans in forbearance increased from an average of 3.74 percent of servicer portfolios during the March 30 to April 5 period to 5.95 percent. In contrast, only 0.25 percent of all loans were in forbearance at the beginning of March.

Loans serviced for Ginnie Mae (loans guaranteed by FHA, VA, and USDA) had the largest increase in forbearance agreements and the largest portfolio share, growing from 5.89 percent to 8.26 percent.

The second greatest number of forbearances by type were those serviced for depositories at 6.57 percent, up from 3.53 percent a week earlier. That surpassed the 5.69 percent of  agreements among those companies servicing for independent mortgage banks (IMB). The prior week the IMB share was 4.17 percent. The share of Fannie Mae and Freddie Mac loans in forbearance nearly doubled week-over-week: from 2.44 percent to 4.64 percent. "With over 22 million Americans filing for unemployment over the past month, homeowners are contacting their mortgage servicers seeking relief, leading to a sharp increase in the share of loans in forbearance across all loan types," said Mike Fratantoni, MBA's Senior Vice President and Chief Economist. "Mortgage servicers continue to receive a very high level of forbearance requests, but volumes were down somewhat compared to the prior week. Given that lockdowns and associated job losses will continue in the coming weeks, forbearance inquiries will likely rise again as we approach May payment due dates. Borrowers facing COVID-19-related hardships should contact their servicer to review all of their options."

Added Fratantoni, "Mortgage servicers are performing an essential function of the housing finance system by continuing to advance funds to investors at a time when roughly 3 million homeowners are now in forbearance. To ensure market stability during these challenging times for consumers and the entire industry, servicers need access to interim financing so that they can continue to play this critical role."

Borrower requests for relief as a percent of portfolio volume dropped compared to the previous week from 2.43 percent to 1.79 percent and calls fell from 14.4 percent to 8.8 percent. Hold times were down dramatically from an average of 10.3 minutes to 4.9 minutes and call abandonment rates were cut nearly in half - 17.0 percent to 9.7 percent.