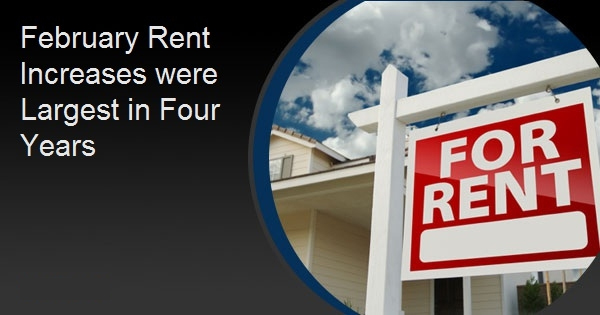 Single-family homes now provide half of all rental units in the U.S. CoreLogic's Single Family Rental Index (SFRI) recorded an annual gain of 3.3 percent in rents for those homes, the largest annual increase in nearly four years. In February 2019 the index was up 3.0 percent year-over-year. The rate of gains peaked in February of 2016 at 4.2 percent.

CoreLogic says, as the single-family rental (SFR) market contends with the current economic shifts, we can expect a rise-and-fall in demand in the coming months. While shelter-in-place orders have residents hunkering down for the moment, we may see an increase in demand for single-family rentals as people shy away from multifamily rentals in the wake of the pandemic.

As has been the case with home prices, the largest percentage growth in rents has been at the lower end of the scale. The rate of increase for single-family homes with rents less than 75 percent of the regional median, was 3.6 percent in February while properties with rents exceeding 125 percent of that median posted a 3.0 percent annual change. This gap in increase rates has been a trend since the spring of 2014, but CoreLogic notes it has been narrowing. The growth rate for low-tier rents was down from 4.0 percent in February 2019 while that for higher priced units accelerated from 2.6 percent a year earlier. "Single-family rents were on the rise early this year, prior to the COVID-19 outbreak across the country," said Molly Boesel, principal economist at CoreLogic. "In the coming months, the virus' impact on the rental market will become more apparent. Uncertainties surrounding job security and shelter-in-place mandates could lessen rental demand in the near term. However, as we look ahead to an economic recovery, consumers may begin considering single-family rentals over multifamily options to provide more space for at-home offices and distance from other housing units."

Metro areas with limited new construction, low rental vacancies and strong local economies that attract new employees tend to have stronger rent growth. Phoenix has annual employment growth of 3.2 percent compared to the national average of 1.5 percent and the highest rate of rent increases among the 20 metro areas tracked by the SFRI, 6.2 percent. It was the 15th consecutive month that Phoenix has topped the list. Seattle was second with gains of 6.1 percent. Detroit was the only metro where rents declined on an annual basis. CoreLogic says that, while employment growth remained strong in February, March was a turning point. "The national emergency declaration catalyzed widespread job losses and furloughed employees. This has disrupted the typical rental demand and supply dynamic, which will ultimately impact rent growth in the coming months."