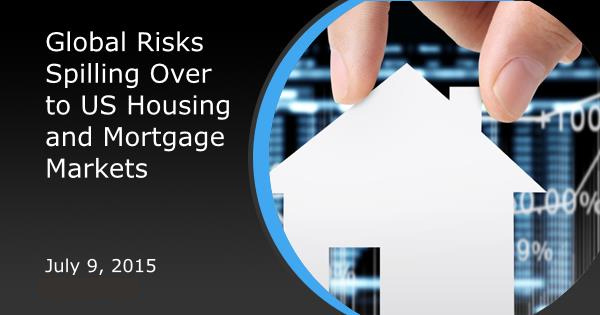 Global Risks Spilling Over to US Housing and Mortgage Markets

Housing news has been fairly light this week, but that hasn’t stopped interest rates from moving.  Two global developments have dominated investors’ attention.  The first is the well-known and ongoing saga in Greece.  Over the weekend, the Greek people voted on a referendum to accept or reject reforms recently proposed by Greece’s European creditors.  The proposed reforms were part of an effort to keep aid money flowing to a Greek nation that would otherwise be facing default on its debt.

Why is this important to the housing market in the US?  For a more detailed answer to this question, see the newsletter from 2 weeks ago.

The short answer is that the way global markets respond to the situation in Greece has a domino effect that leads back to interest rates in the US.  It’s certainly not the only thing moving markets right now, but investors clearly remain interested.   This was evident on Monday morning as interest rates dropped quickly after Greece rejected the reforms (thus pushing the country closer to a Eurozone exit).  It’s that Eurozone exit that fuels demand for safe-haven assets like US Treasuries.  And the bonds that dictate mortgage rates tend to follow Treasuries.

The other big global development is/was the rapid drop in Chinese stock markets.  Some pundits claim this is a bigger deal than Greece, but that will only be the case if the selling continues.  As of Thursday, Chinese stocks had bounced before breaking their long term uptrend.  Combined with the fact that they rallied aggressively earlier this year, this week’s selling spree will look like more of a correction and something quickly to be forgotten.  The risk is for the less likely scenario that this was just the beginning and that Thursday was a minor pause on the way down.  If such a full-scale stock market crash were to transpire in China, it’s hard to see how interest rates in the US wouldn’t benefit.

Even if the situations in Greece and China improve, the drama that’s already been seen has helped mortgage rates to the lowest levels in just over month.  Here’s the sobering caveat: these low rates are based on highly volatile reactions in financial markets to events that can’t be relied upon to create lasting change.  In other words, there’s too much risk that this drop in rates is temporary to treat it as anything other than an opportunity to lock.  That COULD change in the coming weeks, but we haven’t seen enough to bank on that fact just yet.  Conversely, rates run the risk of bouncing quickly higher if Chinese markets stabilize and if critical weekend meetings between Greece and its European creditors bear fruit.

In news from around the water cooler, everyone was talking about the record-setting outage in the New York Stock Exchange on Wednesday.  But did this have an effect on mortgage and housing markets?  Not so much.  The NYSE is just one of several places where investors can trade NYSE-listed stocks.  Additionally, much of the lifeblood of financial markets in the US flows through the Chicago Mercantile Exchange.  Trading of stock futures continued unabated at the CME and looked no worse for the wear during the NYSE outage.

In housing-specific news, the MBA was out with their weekly application survey on Wednesday.  This covered the holiday-shortened week last week, and as such, we can’t read too much into the results. That said, the MBS noted a slight improvement on the back of last week’s lower rates.  Savvy observers would be more inclined to see that for what it is: a coincidence made possible by generally depressed refinance demand.  In other words, the proverbial bar was set low, and it remains low.  Much like GDP has an easier time hitting positive numbers in one quarter after the previous quarters’ numbers were  low, so too is it easier for the week-over-week change in mortgage applications to put up positive numbers when the overall index is at depressed levels.  You can always see the MBA apps charts here.  Note the refinance index is basically bouncing along the bottom of its 5-year range after only a brief rise at the beginning of 2015.