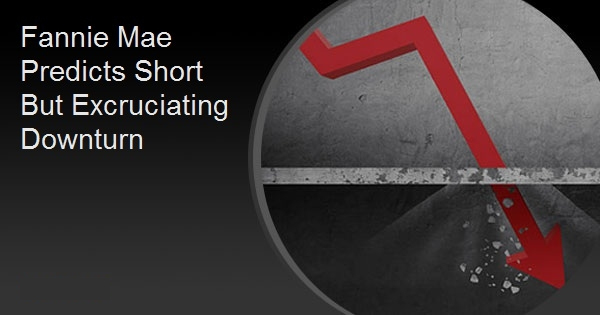 Fannie Mae's April Economic Developments summary is, like Freddie Mac's, relatively optimistic only because they see the impact of the pandemic as being very short lived. However, in the interim, some of the numbers they forecast are hard to hear.

In March, as the COVID-19 crisis loomed, Fannie's Economic and Strategic Research Group reduced outlook for economic growth over the entire year from 2.2 to 1.8 percent. They now expect it to contract by 3.1 percent. Much of the negative impact from the pandemic is expected in the current quarter and it will be a lulu, a reduction of 25.3 percent on top of a projected loss of 3.3 percent in Quarter 1. Based on an end to the social distancing orders in late May and a gradual resumption of business activity in June, there will be above average growth in the remaining two quarters, 7.6 percent and 13.6 percent respectively. Growth for 2021 is projected at 4.8 percent. However, a slower recovery for consumer spending and business investment may mean cash-constrained firms will not reopen, lowering the chances for a quick rebound. The National Federation of Independent Business estimates that half of small businesses cannot survive two months under current conditions. In this scenario GDP could decline nearly 10 percent this year and have only modest growth next year

A more optimistic but less likely scenario is one in which there is a more rapid recovery in the second half of the year. This would require faster mitigation of the virus, consumers emerging more quickly from their homes and increasing consumption and more expansive monetary and fiscal policies. Under this scenario, GDP this year would fall only 1 to 2 percent with a healthy rebound in 2021.

Employment losses will reach record levels in the second quarter with the peak decline in April. If many of these workers become discouraged over lack of job prospects or a long period of social distancing, they may drop out of the labor force meaning the level of unemployment won't fully encompass the full magnitude of lost jobs and hours worked. Fannie Mae expects the unemployment rate to average nearly 12 percent this quarter but to ease back to around 7 percent by year's end.

Housing was in a strong position at the beginning of the year and residential fixed investment may have risen by the largest annualized amount in any Quarter 1 since 2012, an estimated 19 percent. However, declining purchase mortgage applications, falling new single-family for-sale home listings, and waning consumer confidence, will lead to a sharp decline in total home sales and housing starts in the second quarter and all of 2020 and to the 36 percent decline in residential fixed investment referenced earlier.

Home sales growth in February exceeded expections with existing sales up 6.5 percent to the highest level since 2007 and pending sales rising 2.4 percent. March sales numbers are not yet in so a high degree of uncertainty exists about any slowdown.

Fannie Mae expects that existing sales will fall 34 percent to an annualized rate of 3.76 million units in the second quarter, a sales pace similar to the lowest quarters of the Great Recession. Monthly sales will decline to an even lower annualized pace. April sales, however, should be bolstered by the pending sales numbers from March or even February, giving modest support to the quarterly total. Third quarter sales will be down, even as economic activity is expected to begin gradually accelerating. Despite a projection for strong sales in the final quarter of the year, 2020 existing sales are forecast to fall 15 percent from 2019.

New home sales are likely to follow a similar path, but because of when they are counted will likely show a steep decline in April and a quicker recovery over the summer. The forecast is for a 40 percent decline in Q2 followed by a partial rebound of 34 percent in the third quarter. New sales, which had been accelerating prior to the recent slowdown, are now expected to fall 11.9 percent in 2020.

Annual home price growth will decelerate from an original estimate of 4.6 percent to 0.4 percent, but price declines will not be sustained on a national basis because of additional factors including the tight inventories which the nature of the current crisis will tend to sustain. While buyer interest will be down, fewer sellers will be interested in allowing house tours.

Only a handful of states, primarily in the Northeast, have ordered a cessation of building activity, deeming construction a non-essential industry so home construction is likely to fare better than many customer-facing services but will still be disrupted. The National Association of Home Builders monthly builder confidence survey reported over 70 percent of respondents reported major declines in buyer traffic and smaller amounts reported workers unwilling to work on site or difficulty in obtaining inspections or permits. Home builders will likely focus on current project pipelines, slowing the pace of new starts until conditions improve. Single-family starts are forecast to fall 30 percent over the second quarter, with a rebound beginning in the third quarter. For the year, single-family starts are expected to be down 7.6 percent. Based on downgraded forecasts for home sales and prices, Fannie Mae has revised its March forecast for purchase mortgage originations downward by nearly $300 billion for 2020 to $1.1 trillion with a modest recovery to 1.3 trillion in 2021 as housing activity improves. However, the low mortgage rate environment should continue to support refinance volumes, which have been revised upward from last month's forecast by around $240 billion. Overall, 2020 originations should rise to $2.5 trillion with a refinance share of 56 percent.

According to the Mortgage Bankers Association, refinance applications rose 67 percent in March, and this pipeline should continue in coming months. For 2021 the forecast for refinance originations has been revised to a decline of 1.2 trillion from $832 billion in the prior forecast

With the average 30-year fixed mortgage rate at 3.3 percent as of this writing, approximately 50 percent of all outstanding loan balances are estimated to have at least a half-percentage point incentive to refinance, an estimate that rises to about 70 percent if rates fall to 3.0 percent. This likely demand will drive capacity constraints, particularly given social distancing and financial market volatility. These constraints influence how quickly mortgage rates drop and, therefore, refinance volumes. A mitigating factor to refinance demand could be the level of forbearance requests made by current borrowers over time, dampening expected activity.