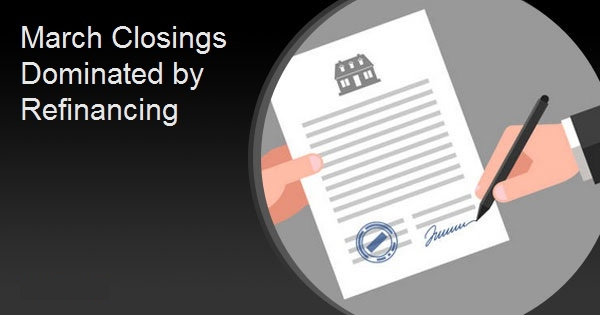 Declining interest rates in March pushed the refinance share of closed loans higher again according to information in Ellie Mae's March Origination Insight Report. The average rate for all 30-year fixed-rate mortgages closed during the month was the lowest since January 2013, 3.65 percent, 21 basis points lower than the average in February. Conventional loans had the same rate and change. Similarly, the average rate for 30-year rate on FHA loans fell to 3.76 percent from 3.87 percent and VA 30-year rates averaged 3.45 percent, down from 3.62 percent.

As rates dropped, the percentage of refinances increased, representing 55 percent of closed loans, up from 51 percent in February and 50 percent in January. The refinancing share of loans increased across all loan types; for FHA loans it was up 2 points to 22 percent, the conventional share increased from 55 to 63 percent, and VA refinances accounted for 30 percent of the total, 7 points more than in February.

"Interest rates continued to decline into March, driving the growing share of refinances for another month," said Jonathan Corr, President and CEO of Ellie Mae. "Despite the impacts of the coronavirus and stock market fluctuations, our lenders are leveraging technology to manage borrower demand for refinances while taking into account the health and safety of all players in the mortgage origination process. With digital solutions for homebuyers and originators like online applications, remote online notarizations, homeowner-guided appraisals and eClosings, our lenders are able to minimize disruptions to their operations and limit in-person interaction."

Seventy-six percent of loans closed in March were conventional loans. FHA had a 13 percent share and VA loans accounted for 7 percent. The conventional share rose 2 points month over month FHA and VA each lost 1 percentage point.

The time to close all loans decreased to 40 days in March, down from 43 days in February. Purchases required 45 days; refinances averaged 35.

Closing rates on all loans decreased slightly to 78.0 percent in March, down from 78.3 percent the month prior. The rate for purchases decreased a half point to 80.2 percent and the rate for refinances dipped to 75.7 percent from 76.0 percent. Ellie Mae calculates closing rates from a sample of loan applications submitted 90 days earlier.

Ellie Mae's Origination Insight Report mines data from a sample of approximately 80 percent of all mortgage applications that were initiated on the company's mortgage management system. Ellie Mae says its report is a strong proxy of the underwriting standards employed by lenders across the country.