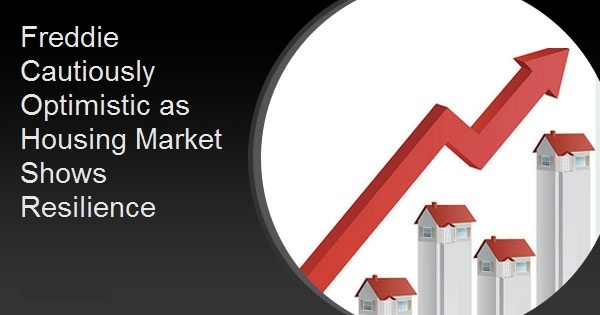 Freddie Mac's Quarterly Forecast is more upbeat than one might expect. While it acknowledges that, with big chunks of the U.S. economy currently in lockdown the housing market faces "its greatest challenge in over a decade," it seems to assume its duration could perhaps be limited, with the recovery starting in the third quarter of the year.

It does hedge this, admitting that the contours of the pandemic and thus the recovery from it seem to vary from country to country so forecasting is even more uncertain than usual. Even if the recovery does take off, with most of the damage contained in the first half of this year, it will probably take another year for things to return to normal.

Freddie Mac's Economic and Housing Research Group says that due to the stay-at-home orders in effect in more than half of the states, housing markets will not have their typical spring sales surge. They will probably fall 45 percent on a seasonally adjusted annual basis in the second quarter. House prices, however, will be insulated to some extent by the fiscal stimulus and extended unemployment insurance coverage provided by the Coronavirus Aid, Relief, and Economic Security (CARES) Act. The forbearance and foreclosure mitigation programs put into effect by lenders and reinforced by the CARES Act will limit the fire-sale conditions that emerged during the Great Recession. Freddie Mac expects home prices to decline by 0.5 percentage point over the next four quarters.

Also preventing a price collapse is the persistent lack of available homes for sale. In addition, population growth and pent up household formations will provide a "tailwind" to housing demand. When the recovery begins, the company forecasts that price growth will accelerate back to a long-term increases between 2 and 3 percent a year.

When Treasury yields became volatile several weeks ago the Federal Reserve stepped in to shore them up. They then turned to the secondary market in mortgage-backed securities (MBS), buying billions of those when demand dried up and interest rates surged.

Freddie Mac forecasts that inflation will remain in check as economic growth slows and long-term interest rates, including those for mortgages, will remain low for the next two years. Refinancing will regain the momentum seen earlier this year but will slow next year. Purchase mortgage originations will be the mirror image of refinances so total originations will be around $2.4 trillion in both 2020 and 2021.

The economists say their forecast is relatively optimistic and there are significant downside risks. Some of the important data reported over the last month, such as unemployment insurance claims and job growth, have been surprises, and not in a good way. They conclude, "If the economic contraction is larger and longer than what we currently forecast the housing market will suffer. Home sales may be slower to bounce back if potential buyers do not come to market. House price declines could also be larger than what we expect, particularly if forbearance and foreclosure mitigation programs do not successfully limit contagion effects on house prices. In the downside scenario mortgage origination volumes would be significantly lower than we forecast."