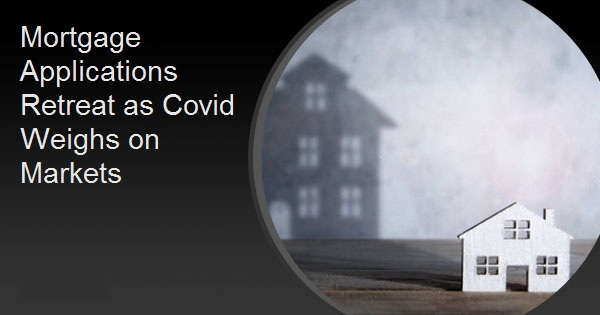 The negative effects of the COVID-19 epidemic appear to have set in last week as mortgage applications, which had managed to increase even after much of the nation's business shut down, tumbled. The Mortgage Bankers Association (MBA) said its Market Composite Index, a measure of loan application volume, declined 17.9 percent on a seasonally adjusted basis during the week ended April 3, and 18 percent lower on an unadjusted basis.

The Refinance Index decreased 19 percent but was still 144 percent higher than the same week one year ago. The refinance share of mortgage activity decreased to 74.2 percent of total applications from 75.9 percent the previous week.

Purchase mortgage applications declined by 12 percent on both an adjusted and an unadjusted basis from the week ended March 27. The Purchase Index level was 33 percent lower than during the same week in 2019.

"Mortgage applications fell last week, as economic weakness and the surge in unemployment continues to weigh heavily on the housing market. Purchase activity declined again, with the index dropping to its lowest level since 2015 and now down 33 percent compared to a year ago," said Joel Kan, MBA's Associate Vice President of Economic and Industry Forecasting. "With much less liquidity and tighter credit in the jumbo market, average loan sizes declined, and mortgage rates for jumbo loans increased to a high last seen in January."

Added Kan, "Refinance applications dropped 19 percent, reversing a 25 percent increase the week before. Given the ongoing rate volatility, along with the persistent lack of liquidity in certain sectors of the MBS market, we expect to see continued weekly swings in refinance activity."

Looking at the impact at the state level, here are results showing the non-seasonally adjusted, week-over- week percent change in the number of purchase applications from Washington, California and New York, the states with the highest numbers of COVID-19 cases.

The FHA share of total applications increased to 10.6 percent from 9.1 percent the previous week and the VA share grew to 14.3 percent from 12.5 percent. The USDA share was unchanged at 0.4 percent.

Interest rates, both contract and effective, were mixed. The average contract interest rate for 30-year fixed-rate mortgages (FRM) with loan balances at or below the conforming limit of $510,400 increased to 3.49 percent from 3.47 percent, with points decreasing to 0.28 from  0.33. The effective rate was unchanged from last week.

The average contract interest rate for 30-year fixed-rate mortgages with loan balances that exceeded the conforming limit was 3.87 percent, up from 3.84 percent, with points decreasing to 0.26 from 0.31 The effective rate was higher.

The average contract interest rate for 5/1 adjustable rate mortgages (ARMs) moved to 3.39 percent from 3.35 percent, with points increasing to -0.02 from -0.03. The effective rate also increased. The ARM share of activity ticked up to 3.3 percent from 3.2 percent.