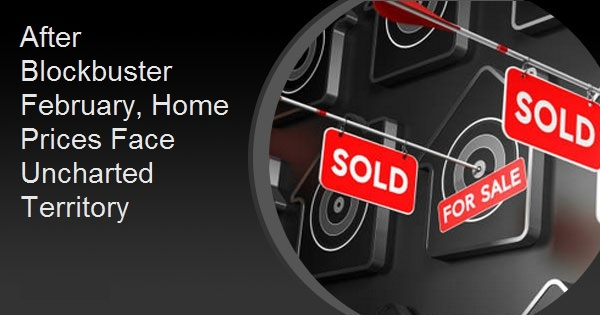 Home price gains accelerated for the fourth straight month in February with a 4.1 percent annual increase in the CoreLogic Home Price Index (HPI) The 12-month rate of appreciation in January was 4.0 percent. The company said home prices nationwide, including distressed sales, rose 0.6 percent from January to February, up from growth of 0.1 percent the previous month.

"Before the onset of the pandemic, the quickening of home price growth during the first two months of 2020 highlighted the strength of purchase activity," said Dr. Frank Nothaft, chief economist at CoreLogic. "In February, the national unemployment rate matched a 50-year low, mortgage rates fell to the lowest level in more than three years and for-sale inventory remained lean, all contributing to the pickup in value growth."

CoreLogic said it has been monitoring shifts in the housing market and economy as the pandemic has grown. They have seen home-purchase mortgage application increase in January and through the end of February as prospective buyers took advantage of record-low interest rates. However, purchase activity slowed in the latter half of March as unemployment began to rise and local shelter-in-place directives led to cancellations of open houses.

Frank Martell, President and CEO of CoreLogic said, "The nearly 10-year-old recovery of the U.S. housing market has run headlong into the panic and uncertainty from the global COVID-19 pandemic. In terms of home value trends, we are in uncharted territory as we battle the outbreak with measures that are generating a never-before-seen, rapid downshift in economic activity and employment. We expect that many homeowners will initially be somewhat cushioned by government programs, ultra-low interest rates or have adequate reserves to weather the storm. Over the second half of the year, we predict unemployment and other factors will become more pronounced, which will apply additional pressure on housing activity in the medium term."

The CoreLogic HPI Forecast indicates that home prices will increase by 0.5 percent from February 2020 to March 2020. The company does not appear to have made a prediction for prices over the next 12 months. Homes that settle during March will largely reflect purchase contracts that were signed in January and February, before the coronavirus (COVID-19) outbreak. The HPI Forecast for February was produced with projections for economic variables available prior to mid-March and does not incorporate subsequent deterioration in the economy.

CoreLogic says that one-third of the country's 100 largest metropolitan areas have an overvalued housing stock as of February 2020. The CoreLogic Market Conditions Indicators (MCI) indicates that 29 percent of the areas were undervalued, and 38 percent were at value. The MCI analysis categorizes home prices in individual markets as undervalued, at value or overvalued by comparing home prices to their long-run, sustainable levels, which are supported by local market fundamentals such as disposable income. The MCI analysis defines an overvalued housing market as one in which home prices are at least 10 percent higher than those levels while an undervalued housing market is one in which home prices are at least 10 percent below it.