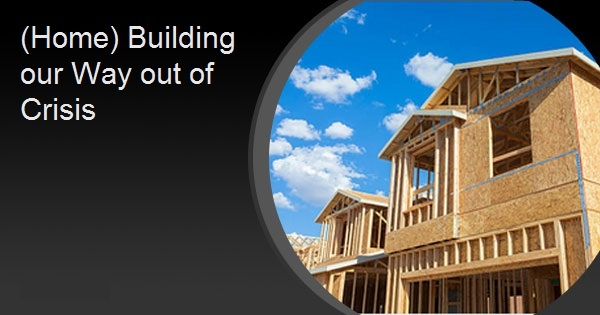 (Home) Building our Way out of Crisis

Home building might be the answer to more than just the housing shortage according to some information provided by Paul Emrath, economist for the National Association of Home Builders (NAHB). He maintains that it can also be a significant factor in rebuilding the economy once the COVID-19 crisis ends. Emrath has updated NAHB's 2014 estimates of the economic impact that residential construction has on the U.S. economy, especially via the number of jobs it creates.

Nationally he estimates that building an average single-family home creates 2.90 full-time equivalent (FTE) jobs. Full-time equivalency is enough work to keep one person employed for a full year. This work generates $189,000 in wages and salaries and $110,957 in taxes.

Although the majority of these jobs (FTE of 1.71) are in construction, at the national level they also include jobs in the industries that produce lumber, concrete, lighting fixtures, heating equipment, and other products that go into building or remodeling. Other jobs are created in the process of transporting, storing and selling these products and for professionals such as architects, engineers, real estate agents, lawyers, and accountants.

In addition to wages, there is also an impact from profits of the proprietors and corporations. Since two-thirds of single-family home builders subcontract out 75 percent of the work of building a home, a large share of proprietors are subcontractors. These subs are often quite small, perhaps only one-person operations and they are not included in the number of jobs created, even though they are generating income and taxes. Self-employment is even more of an issue in the real estate industry where proprietor profits are several times larger than the wages and salaries generated because most agents are classified as contractors.

The wages and salaries of workers shown in the first two tables are subject to federal, state, and sometimes local taxes. So are the profits of businesses, whether organized as proprietorships or corporations. Beyond this, many states collect sales taxes on material sold to home builders, and local jurisdictions typically charge fees for approving building permits and extending utility services.

In summary, home building generates jobs in industries like construction and manufacturing, jobs for highly educated professionals like engineers and financiers, and revenue to support owners of small businesses like construction trade contractors.  This is an attractive mix of entities to support in a healthy national economy, especially during a period of recovery.