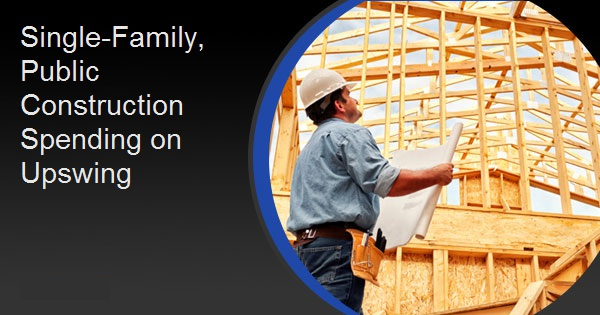 Nationwide outlays for construction slipped slightly in February. The Census Bureau said public and private sources spent at a seasonally adjusted annual rate of $1.367 trillion on all forms of construction, down 1.3 percent from the rate in January. This was 6.0 percent more than was expended in February 2019.

Privately funded spending on residential construction had the largest annual increase of any private construction category at 11.3 percent. It was, however, 0.6 percent lower than was spent in January at a seasonally adjusted rate of $564.302 billion compared to $567.555 billion. On an unadjusted basis a total of $39.588 billion was spent during the month and YTD spending was up 13.8 percent to $78.233 billion.

Single-family construction jumped 3.9 percent from January and was up 16.1 percent compared to February 2019. The annual rate of single-family units put in place was $311.679 billion. Non-adjusted spending was $20.691 billion, essentially unchanged from January, but for the first two months of the year the aggregate of $41.364 billion spent is 13.3 percent higher than during the same period last year.

Multifamily spending eked out an 0.1 percent gain compared to January but declined by 5.7 percent on a seasonally adjusted annual basis to $58.276 billion. The $9.151 spent on new multifamily units YTD is down 5.4 percent from the first two months of 2019.

Construction projects put in place with public funds were at a rate of $340.876 billion, down 1.5 percent from January but with growth of 7.4 percent year-over-year. YTD spending has grown by 11.3 percent to $43.606 billion.

Publicly funded residential spending has been increasing since the first of the year. The annual rate of $7.281 billion is down slightly from January but up 21.7 percent year-over-year. On a non-adjusted basis there was $529 million spent in January and spending is up 27.0 percent on a YTD basis.