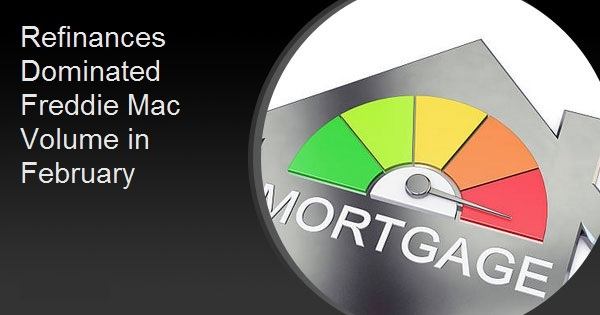 Freddie Mac reported this week that its total mortgage portfolio increased at an annualized rate of 5.5 percent in February, up from a 4.3 percent gain in January.  The portfolio balance at the end of the period was $2.350 trillion compared to $2.339 trillion at the end of January and $2.190 trillion a year earlier. The growth rate for the year to date is 4.9 percent.

Purchases in Freddie Mac's Mortgage Related Investments Portfolio totaled $29.864 billion for the month compared to $27.516 billion in January. Liquidations were ($2.547) billion and ($2.665) billion for February and January respectively and Sales for the two periods were ($27.297) and ($35.350) billion. The ending balance in the portfolio was $202.195 billion nearly identical to the ending balance in January.

The Mortgage Related Investments Portfolio's eked out a positive annual growth rate in February after negative growth in six of the last seven months. The February rate was 0.1 percent, up from (59.2) percent in January. The annualized growth in February 2019 was 1.2 percent.

Freddie Mac's single-family delinquency rate was unchanged at 0.60. This is a decline of 9 basis points on an annual basis. The rate for credit-enhanced Primary Mortgage Insurance loans dipped 1 basis point to 0.77 percent while the non-credit portion remained at 0.67 percent. The multi-family delinquency rate was 0.08 percent, unchanged from January but up 0.07 point since last February.

Freddie Mac said the measure of its exposure to changes in portfolio value averaged $25 million in February. In January it was $3 million.