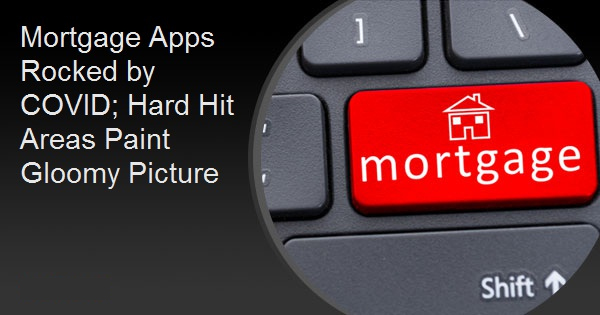 The volume of mortgage applications plummeted last week as households, rattled by COVID-19 fears, self-isolated in their homes and businesses were shuttered in the hardest hit states or scurried to shift operations to their employees' homes. In the midst of it all, mortgage rates also rose significantly.

The Mortgage Bankers Association said its Market Composite Index, a measure of mortgage loan application volume, decreased 29.4 percent on a seasonally adjusted basis during the week ended March 20 and was down 29 percent before adjustment.

Refinancing volume, which had risen an aggregate of more than 100 percent in the weeks ended February 28 and March 6, fell for the second straight week, losing 34 percent last week alone. As an indication of how frenetic recent business has been, however, refinancing activity was still 195 percent higher than the same week last year and accounted for 69.3 percent of last week's applications. The refinancing share during the week ended March 13 was 74.5 percent.

"It's important to keep in mind that weekly rate readings from MBA and Freddie Mac or just that... weekly.  They're also survey-based.  Actual rates moved wildly last week with the average lender seeing massive swings from day to day and sometimes hour to hour," says MBS Live's CEO Matt Graham.  "Point being, a 34 percent loss in refi apps may seem like a surefire indicator that COVID is hitting the refi market.  While that's true in some cases where apps have been canceled due to job losses, the bigger story behind the decline is the rate volatility.  There's also simply been a technical correction after the fastest-paced surge in the history of MBA's numbers 2 weeks ago.  We're going to have a lot of gloomy econ data in the coming weeks and months, but this pull-back in refi apps is not on that list.  There is still a ton of demand on the sidelines, ready to pull the trigger when rates edge back toward all-time lows."

"The 30-year fixed mortgage rate reached its highest level since mid-January last week, even as Treasury yields remained at relatively low levels. Several factors pushed rates higher, including increased secondary market volatility, lenders grappling with capacity issues and backlogs in their pipelines, and remote work staffing challenges," said Joel Kan, MBA's Associate Vice President of Economic and Industry Forecasting. "With these higher rates, refinance activity fell 34 percent, and both the conventional and government indices dropped to their lowest level in a month. Looking ahead, this week's additional actions taken by the Federal Reserve to restore liquidity and stabilize the mortgage-backed securities market could put downward pressure on mortgage rates, allowing more homeowners the opportunity to refinance."

Added Kan, "Home purchase applications were notably impacted by rising rates and the widespread economic disruption and uncertainty over household employment and incomes. Last week's purchase index fell 15 percent to its lowest level since August 2019. Compared to a year ago, purchase applications were down 11 percent - the first year-over-year decline in over three months. Potential homebuyers might continue to hold off on buying until there is a slowdown in the spread of the coronavirus and more clarity on the economic outlook."

MBA provided a close up of the decline in application volume in the three states that have had the largest number of confirmed COVID-19 cases to date. The chart below shows the change in the volume of purchase applications for each of the states during the week ended March 13 and during this past week.

Contract and effective rates moved higher for the second week in a row for all products except FHA backed loans. The average contract interest rate for 30-year fixed-rate mortgages (FRM) with origination balances at or below the conforming loan limit of $510,400 increased to 3.82 percent from 3.74 percent, with points decreasing to 0.35 from 0.37.

Jumbo 30-year FRM, loans with origination balances exceeding the conforming limit, had average rates of 3.84 percent with 0.35 point. The prior week the rate was 3.77 percent, with 0.32 point.

The average contract interest rate for 30-year FRM backed by the FHA decreased to 3.69 percent from 3.71 percent. However, average points increased to 0.43 from 0.28 pulling the effective rate higher.

The rate for 5/1 adjustable rate mortgages (ARMs) increased to 3.38 percent from 3.19 percent, with points increasing to 0.26 from 0.19. The ARM share of applications decreased to 6.1 percent from 6.4 percent the previous week.