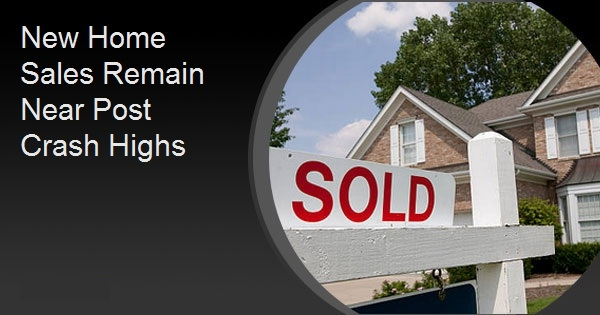 Sales of newly constructed home jumped to a 13-year high of 764,000 annualized units in January, a number that was revised even higher today to 800,000. Given that increase, it was expected that there would be a bit of a pullback in February.

Sales in February did decline by 4.4 percent according to Tuesday morning's report from the U.S. Census Bureau and the Department of Housing and Urban Development. Even so, they came in higher than the most optimist forecast.

At the end of February were an estimated 319,000 new homes for sale. This is estimated at a 5.4-month supply at the current rate of sales. The inventory was equivalent to a 5.5-month supply in January and at 6.1 months a year earlier.

Sales were strongest in the Northeast with a monthly increase of 38.9 percent and a 47.1 percent gain on an annual basis. Sales in the Midwest fell 7.3 percent but were still 15.6 percent higher than in February 2019.

The South eked out a 1.0 percent increase in sales compare to January and were 6.3 percent higher year-over-year. Sales dropped 17.2 percent in the West while remaining 24.7 percent above sales the previous February.

Of the 68,000 homes sold during the month, nearly identical numbers were sold pre-construction and during construction (22,000 each). Only 23,000 were ready for occupancy.