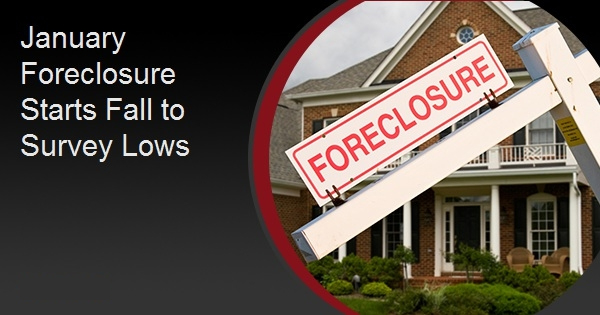 Loan performance overall continues to validate the perceived quality of recent loan vintages and delinquency metrics continue to test and break old records. Foreclosure starts were down 20 percent in January 2020 compared to a year earlier, just one of the further improvements noted in Black Knight's "first look" at January/February data. Starts numbered 32,300, which was 24.5 percent lower than in December. It was the lowest level of foreclosure starts since Black Knight began reporting it exactly 20 years earlier.

The company notes that these numbers were gathered preceding any effects from the onset of the COVID-19 pandemic. The March data should shed more light on any economic impacts on housing.

The number of loans with mortgages that were 30 days or more past due but not in foreclosure in February rose 32,000 or 1.95 percent to 1.737 million. The delinquency rate of 3.3 percent was 1.95 percent lower than the previous month and 15.6 percent below that in February 2019. The latter represents a decline of 282,000 non-current loans.

Serious delinquencies, those 90 days or more past due but not in foreclosure stand at 409,000 loans, a decline of 10 percent from a month earlier and 93,000 year-over-year.

The foreclosure inventory rate, loans in the process of foreclosure, is the lowest since 2005 and within 1 basis point of the all time low. The number of loans in that inventory are down 7,000 and 25,000 from the two earlier periods at 239,000.

January saw another boost in the rate of prepayments as mortgage rates started to fall again. The single month mortality rate (SMM) was up 7.9 percent from the prior month to 1.35 percent and is 106.6 percent higher on an annual basis. This stat is also based on pre-epidemic performance. Black Knight says it will watch the February SMM to get a handle on March refinancing.

Black Knight will provide more detail on recent mortgage performance in its Mortgage Monitor which will be published on April 6.