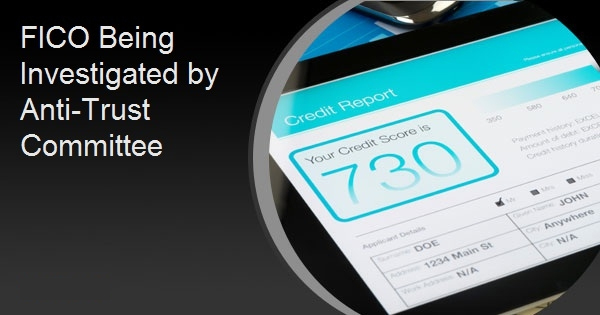 FICO Being Investigated by Anti-Trust Committee

The U.S. Department of Justice (DOJ) has launched a civil investigation into FICO Corporation.

DOJ is apparently looking into claims that the company which provides credit scores for lenders, is guilty of exclusionary conduct that may have led to its market dominance. On its website the company claims its various credit scoring models have a 90 percent market share.

FICO released a statement on the weekend saying it was notified last Friday that DOJ's Antitrust Division had opened an investigation. It says it intends to cooperate fully and "looks forward to a constructive dialogue about the state of competition in our industry."

While FICO is the leader in its field and its score models are widely used in processing loans for purchase by Fannie Mae and Freddie Mac, it isn't the only game in town. The three major credit bureaus, TransUnion, Experian, and Equifax, jointly founded VantageScore, FICO's major competitor, and each also markets scores under their own labels.

The FICO statement continued; "Lenders have multiple choices of analytic models to use in credit decisioning and are free to choose the credit score that works best for them. In a competitive marketplace, the FICO® Score is chosen because it is trusted to be independent, predictive and reliable, and because FICO is constantly innovating to enable lenders to responsibly extend access to credit.  FICO has also earned the trust of consumers through programs like the FICO Score Open Access initiative, which provides customers from more than 200 financial institutions with free access to the FICO Scores used to manage their credit accounts."

FICO appears to believe the inquiry originated from antitrust claims made by TransUnion in private litigation between the two. According to FICO, TransUnion made these claims only after FICO filed a suit of its own to recover what it said was millions in unpaid royalties from its competitor.

The Justice Department has not commented on its inquiry and we could find no statement from TransUnion. However, FICO, the three credit bureaus, and VantageScore appear to have a long history of litigation.