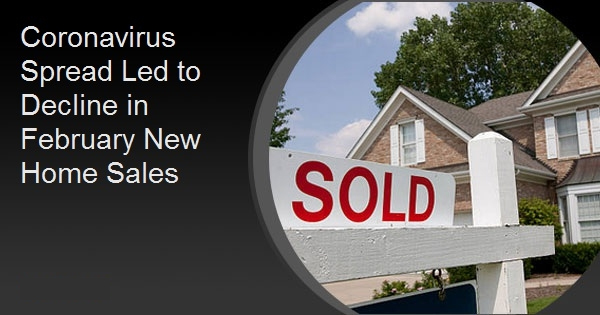 New home sales in February are expected to be down from January's levels based on loan application volume data reported by the Mortgage Bankers Association (MBA). Its Builder Application Survey (BAS) shows that applications for financing new home purchases dipped by 1 percent month-over-month but were 25.9 percent higher than in February 2019. These numbers are not adjusted to account for "typical seasonal patterns."

Derived from application volume information and assumptions regarding market coverage and other factors, MBA estimates new single-family home sales were running at a seasonally adjusted annual rate of 746,000 units in February, a 13.8 percent decline from January's sales rate of 865,000. On an unadjusted basis, the estimate is for 64,000 sales, 3 percent fewer than the 66,000 sales reported the previous month.

"Despite a monthly decrease in February new applications and estimated new home sales, the year-over-year trends were strong, with new applications increasing 26 percent, and our estimate of new home sales increasing 8 percent," said Joel Kan, MBA's Associate Vice President of Economic and Industry Forecasting. "Looking ahead, there is significant uncertainty regarding how the coronavirus epidemic will impact the housing market, and some of January's record-level activity could have been attributed to the warmer winter weather, lower mortgage rates, and the tight inventory of existing homes on the market - especially in lower price tiers."

Conventional loans composed 69.3 percent of the month's applications, FHA loans accounted for 18.5 percent, and VA loans and RHS/USDA loans for 11.4 percent and 0.8 percent respectively. The average loan size for new homes purchases decreased from $346,140 in January to $340,169 in February.

MBA's Builder Application Survey tracks application volume from mortgage subsidiaries of home builders across the country. Official new home sales estimates are conducted by the Census Bureau on a monthly basis. In that data, new home sales are recorded at contract signing, which is typically coincident with the mortgage application. The Census Bureau is scheduled to publish February data on Tuesday, March 24.