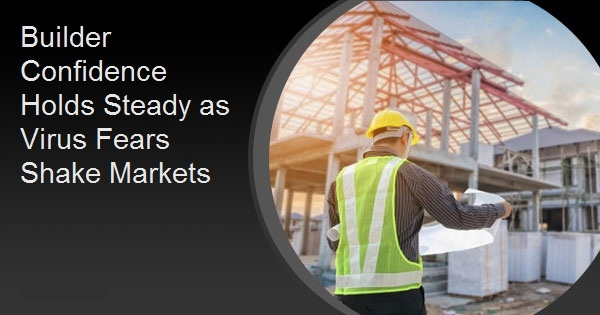 Builder confidence slipped slightly in March according to the National Association of Home Builders (NAHB), but there was one huge caveat. The monthly survey the association conducts among its new home builder members was partially (about 50 percent) complete prior to March 4. The mandatory shutdowns, and the worst of the stock market collapse had yet to happen.

That said, the NAHB/Wells Fargo Housing Market Index fell two point this month to 72. NHBA notes that the index levels have held firm in the low- to mid-70 range for the last six months.

The survey, which NAHB has been running for over 30 years, asks for builder perceptions of current single-family home sales and sales expectations for the next six months as "good," "fair" or "poor." The survey also asks builders to rate traffic of prospective buyers as "high to very high," "average" or "low to very low." Scores for each component are then used to calculate a seasonally adjusted index where any number over 50 indicates that more builders view conditions as good than poor.

NAHB said the four-point drop in the forward-looking perception about sales could probably be attributed to early concerns about the economic impact of the virus. Also, in spite of the low interest rates and the opportunity presented by the tight inventory of available homes, downpayment requirements are a limiting factor.

Overall, 21 percent of builders responding to the survey reported some disruptions in the availability of supplies from countries such as China. However, among those who responded to the survey after March 6, 33 percent made that claim. This could indicate that the supply chain is an emerging issue.

Regional results are reported as three-month moving averages. The Midwest fell two points to  66, the South moved one point lower to 77 and the West posted a one-point decline to 82. The Northeast rose two points to 64.