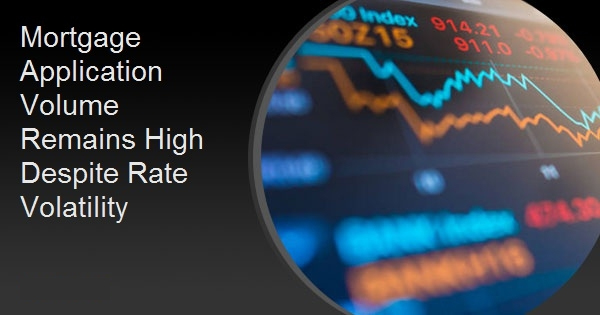 After last week's report on a record-busting week for mortgage applications, with applications for refinancing surging 79 percent and mortgage volume up nearly 55 percent overall, one might expect that things would settle down a bit. What probably is surprising, as the country goes into virtual lock down over the coronavirus outbreak, is how strong activity remained.

The Mortgage Bankers Association (MBA) reports that, during the week ended March 14, its Market Composite Index, a measure of mortgage application volume, decreased 8.4 percent on a seasonally adjusted basis and lost 8.0 percent on an unadjusted basis. This left the volume of business 168 percent higher than the same week in 2019.

The Refinance Index decreased 10 percent from the previous week but was still at historic levels, remaining 402 percent higher than the same week one year ago. Refinancing still constituted 74.5 percent of all application activity, only slightly lower than its 76.5 percent share the previous week.

The seasonally adjusted Purchase Index lost 1.0 percent from its level one week earlier and was unchanged on an unadjusted basis. Purchase activity was 11 percent higher than the same week one year ago.

Joel Kan, MBA's Associate Vice President of Economic and Industry Forecasting said "The ongoing situation around the coronavirus led to further stress in the financial markets late last week, with unprecedented volatility and widening spreads. This drove mortgage rates back up to their highest levels since mid-February and led to a 10 percent decrease in refinance applications. However, refinance activity remains very high.

"Excluding the spike two weeks ago, the index remained at its highest level since October 2012, and refinancing accounted for almost 75 percent of all applications," Kan said. "The Federal Reserve's rate cut and other monetary policy measures to help the economy should help to bring down mortgage rates in the coming weeks, spurring more refinancing. Amidst these challenging times, the savings that households can gain from refinancing will help bolster their own financial circumstances and support the broader economy."

He added, "Purchase activity was flat but remained over 10 percent higher than a year ago. The purchase market was on firm footing to start the year and has so far held steady through the current uncertainty. Looking ahead, a gloomier outlook may cause some prospective homebuyers to delay their home search, even with these lower mortgage rates."

Mortgage rates, both contract and effective, jumped significantly higher than their unprecedented low levels the previous week. The average contract interest rate for 30-year fixed-rate mortgages (FRM) with origination balances at or below the conforming limit of $510,400 increased to 3.74 percent from 3.47 percent. Points averaged 0.37 compared to 0.27.

The average contract interest rate for 5/1 adjustable rate mortgages (ARMs) rose 17 basis points to 3.19 percent with points decreasing to 0.19 from 0.25. The ARM share of activity increased to 6.4 percent of total applications from 5.7 percent the prior week.