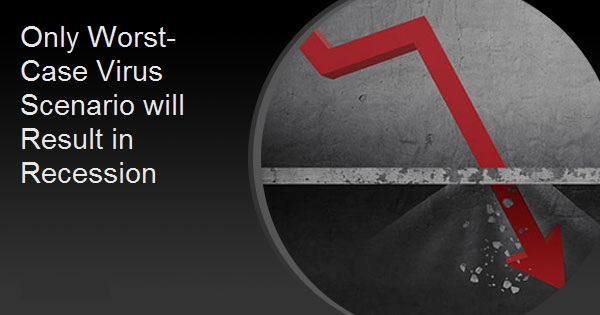 Only Worst-Case Virus Scenario will Result in Recession

Fannie Mae's forecasts for the rest of 2020 took a bit of a hit from the pandemic panic. The company's Economic Developments report for March contains a downgrade to its earlier 2020 growth predictions from 2.2 percent to 1.8 percent. COVID-19 isn't the only villain in the picture, so is Saudi Arabia's decision to dramatically increase oil production as well as the resulting impacts from both on financial market volatility and consumer behavior.

The company's Economic & Strategic Research (ESR) Group says these negative developments will shave about three-tenths of one percent from real gross domestic product (GDP) growth. However, updated data and an increase in the short-run forecast for residential fixed investment means, on net, first quarter growth has been revised down by only one-tenth to 1.8 percent. The forecast for Q2 is near zero as consumer spending and business investment will probably soften due to financial market volatility, lower oil prices, and behavior related to avoiding the virus. A rebound over the second half of the year should partially make up for weaker growth in the first half of 2020.

Risks to this outlook are driven by uncertainty over the extent and duration of the coronavirus outbreak, how greatly consumers and firms will respond to avoid infection, and what government policies will be implemented. There is little precedent to assist projections, and there is a range of possible outcomes.

Fannie's baseline forecast assumes that the global outbreak will begin to recede by mid-2020, with economic activity starting to rebound in the summer. Risks to the forecast are therefore weighted significantly to the downside and the company has laid out several scenarios.

1. Short-Run Outbreak Mostly Overseas: With adequate isolation measures and warmer weather approaching the outbreak might soon peak as cases in China and South Korea seem to have done. In this case, U.S. growth would be negatively affected mostly through international trade and tourism channels, and financial market volatility leading to weaker consumer and business confidence. This scenario is the base case scenario in the baseline forecast.

2. Short-Run Outbreak Including the U.S.: Even if the outbreak lasts only two to three more months, a significant slowing of growth, perhaps even a contraction, would be probable in Q2. The impact in this scenario will be from behavioral changes that likely result in spending in such areas as food service, entertainment, hospitality, and domestic travel. This slowdown would likely still be followed by a rebound, but the hit to full-year growth would be larger than in Scenario 1. The extent to which second quarter growth is affected depends on the scope of domestic infection, the aggressiveness of avoidance behavior, and government policies implemented in response.

3. Longer-Run, Severe Global Outbreak: The World Health Organization has formally declared the virus a pandemic. If the outbreak becomes broader and long-lasting, resembling historic influenza pandemics that infected 10 to 40 percent of the global population over 12 to 18 months, significant job losses and firm closures and a global recession becomes more likely. A high percentage of workers out sick and meaningful numbers of fatalities would directly harm economic output. The economists say they don't see this scenario as the most probable outcome, but the downside risk should be considered. The Federal Open Market Committee (FOMC) will meet for its regularly scheduled meeting on March 18, and Fannie May anticipates a second 50 basis point cut to its fund, bring it to a range of 0.50 percent to 0.75 percent. They also forecast that, as financial volatility and uncertainty surrounding the coronavirus fade, the Fed will reverse these cuts and raise rates 50 basis points early next year. In addition to this accommodative monetary policy, expansionary fiscal policy may be on the table, as federal proposals regarding payroll tax cuts and sick-leave subsidies for hourly workers are beginning to circulate.

The decline in mortgage rates early this month should provide counterweight for housing demand, so home sales and construction are likely to fare comparatively well in coming months. This, along with better-than-expected early 2020 housing data have spurred an upward revision to total home sales growth to 2.9 percent from 2.3 percent and mortgage originations to $2.6 trillion from $2.3 trillion. The latter is largely driven by stronger refinancing which is seen to increase from $895 billion to $1.17 trillion. The purchase originations forecast increased more modestly to $1.40 trillion. The refinance share in 2020 will rise to 45 percent, the highest share in four years. Home Sales in coming months are likely to face competing short-term forces. On one hand, the steep drop in mortgage rates will strengthen housing demand and boost buyer purchasing power and affordability and few homeowners will be feeling locked in with a current rate they can't replicate. This will potentially lead to more move-up buyers and greater for-sale inventories of starter homes.

On the other hand, consumer sentiment is likely to be dampened by financial volatility and slower growth. Furthermore, some potential buyers and sellers may be hesitant to tour or list their homes, respectively, due to fear of the virus contagion. Sellers may also expect that demand will be temporarily dampened and supply chain disruptions could show new home construction. The magnitude of these effects will be determined by the extent of the outbreak and how severely economic growth slows.

In the upside and baseline cases, Fannie Mae says the negative interest rate shock would probably be the stronger driver, boosting home sales. Therefore, the increase in the forecast for existing sales over the first half of the year is by a lower magnitude than if the decline in interest rates was independent from the coronavirus. The more severe scenario would increase the likelihood of slowing housing activity due to prolonged economic slowdown and its repercussions for labor markets. Sales may actually be more limited by the lack of homes for sale. The months' supply of existing homes sat at only 3.1 in January, a record low for that month.