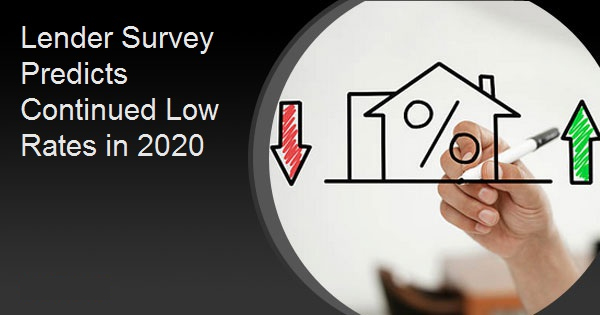 With the caveat that its Lender Sentiment Survey was conducted in February when the world was a very different place, Fannie Mae says mortgage lenders set several new highs with their optimistic outlooks for business in the first quarter.

Fifty-one percent of lenders surveyed believe their profit margins would grow this quarter compared to Quarter 4 of 2019. Forty-four percent expected them to remain relatively flat. Only 4 percent were expecting profits to decline.

Consumer demand was the primary reason for the optimism regarding profits. It was mentioned by 67 percent of respondents while operational efficiency, i.e. technology, was cited by 51 percent. Among the few who expected profits to decrease, competition (50 percent) and staffing costs (42 percent) were the leading reasons.

Those expectations for purchase and refinance mortgage demands were also at a survey high. For purchase mortgages, across two of the three loan types (GSE-eligible and government), the net share of lenders reporting demand growth over the prior three months reached the highest readings for any first quarter in the survey's history, as well as the highest since Q1 2015 for non-GSE-eligible loans. Meanwhile, the net share reporting growth expectations for the next three months remained positive and reached survey highs across all loan types.

For refinance mortgages, the net share of lenders reporting demand growth over the prior three months went down slightly from last quarter's survey highs but remained very strong. Demand growth expectations on net for the next three months reached new survey highs for GSE-eligible and government loans.

"The mortgage industry has had a strong start in 2020, consistent with our forecast and the February Home Purchase Sentiment Index," said Fannie Mae Senior Vice President and Chief Economist Doug Duncan. "Lenders' expectations of consumer demand for purchase and refinance mortgages hit survey highs this quarter, with many lenders pointing to favorable interest rates as the engine driving the demand. The first quarter survey data, which were collected during the first two weeks of February, do not reflect the potential impact of the decline in the 10-year Treasury rate seen in recent weeks. Mortgage spreads have since widened. Given capacity constraints and continued interest rate volatility, we expect mortgage rates to continue to decline and spreads to continue to be wider throughout 2020."

"Past experience from 2012 and 2016 suggests that mortgage spreads generally take a few months to compress," continued Duncan. "We anticipate similar rate dynamics this time, depending on the path of the underlying Treasury rate. Although uncertainty around coronavirus may have a dampening effect on housing market sentiment, for now we expect the continued low interest rate environment will help bolster mortgage volume, particularly refinances, as well as lender profitability, consistent with lenders' expectations."

The share of lenders who believe the U.S. economy is on the right track also reached a survey high. Ninety percent of lenders gave that response, with no deviation across the size of their institutions.

Lenders reported no significant changes to their credit standards over the prior three months and expected no major changes going forward. Fannie Mae says that for non-GSE-eligible and government loans the net share of lenders reporting credit easing seems to have gradually trended down over the last year.

The survey was completed online over the period of February 15-17 by 195 senior executives representing 183 institutions. Seventy-one mortgage banks, 73 depository institutions, and 38 credit unions responded. Fannie classified 91 as small, in the bottom 65 percent of lenders, and 52 as large, among the top 15 percent.