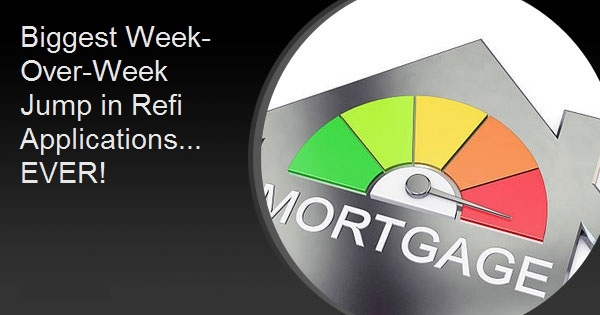 There was a nearly incomprehensible surge in mortgage applications during the week ended March 6 as mortgage rates hit near record lows. According to the Mortgage Bankers Association (MBA), while purchase applications had a better than average week, refinancing was at an 11-year high.

MBA said its Market Composite Index, a measure of mortgage loan application volume, increased 55.4 percent on a seasonally adjusted basis from one week earlier. On an unadjusted basis, the Index rose by 54 percent.

The seasonally adjusted Purchase Index grew by 6 percent on an unadjusted basis from the prior week and was 7 percent higher before adjustment. Purchase applications were up 12 percent compared to the same week in 2019.

"Market uncertainty around the coronavirus led to a considerable drop in U.S. Treasury rates last week, causing the 30-year fixed rate to fall and match its December 2012 survey low of 3.47 percent. Homeowners rushed in, with refinance applications jumping 79 percent - the largest weekly increase since November 2008," said Joel Kan, MBA's Associate Vice President of Economic and Industry Forecasting. "With last week's increase, the refinance index hit its highest level since April 2009. The purchase market also had a solid week, with activity nearly 12 percent higher than a year ago. Prospective buyers continue to be encouraged by improving housing inventory levels in some markets and very low rates."

Added Kan, "Taking into the account the current economic situation and how much rates have fallen, MBA is nearly doubling its 2020 refinance originations forecast to $1.2 trillion, a 37 percent increase from 2019 and the strongest refinance volume since 2012. As lenders handle the wave in applications and manage capacity, mortgage rates will likely stabilize but remain low for now. This in turn will support borrowers looking to refinance or purchase a home this spring."

MBA's revised forecast also includes a 20.3 percent gain in total mortgage originations from 2019's volume of $2.17 trillion to around $2.61 trillion this year. Purchase originations are now forecasted to rise 8.3 percent to $1.38 trillion.

The mushrooming volume also resulted in a redistribution of applications across lenders. The FHA share of total applications plummeted to 6.9 percent from 9.3 percent the previous week, but the VA share rose to 13.1 percent from 10.5 percent. The always fractional USDA share of total applications shrunk even further to an 0.3 percent share from 0.4 percent a week earlier. The size of loans increased from $359,300 to $367,900 overall and from $349,400 to $354,200 for purchase loans.

While MBA is reporting average interest rates prior to the complete rout that occurred this Monday, all products posted substantial declines from the week ended February 28 on both a contract and an effective basis.

The contract interest rate for 30-year fixed-rate mortgages (FRM) with loan balances at or below the conforming limit of $510,400 tied with a December 2012 rate as the lowest average in survey history at 3.47 percent. This was down 10 basis points from the previous week. Points moved to 0.27 from 0.26.

The average contract interest rate for jumbo 30-year FRM, loans with balances exceeding the conforming limit, fell to 3.58 percent from 3.63 percent, the lowest rate since MBA first tracked the product in 2011. Points averaged 0.20, down from 0.21.

Thirty-year FRM  backed by the FHA had a 17-basis point rate drop to an average of 3.57 percent. Points were unchanged at 0.25.