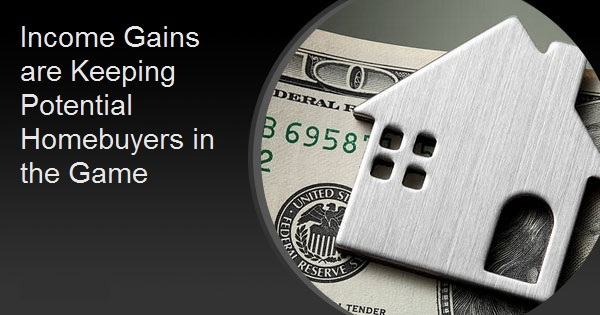 Income Gains are Keeping Potential Homebuyers in the Game

Only one of the six components of Fannie Mae's Home Purchase Sentiment Index (HPSI) posted a net gain in February, but the increase in the numbers of respondents who reported significantly higher income almost offset the other declines. The HPSI dipped a half point compared to January to 92.5 but remains close to its all-time high of 93.8. Year over year, the HPSI is up 8.2 points. Fannie Mae says this reflects in part consumers' more favorable mortgage rate expectations, despite that index component moderating this month.

Thirty-two percent of the respondents to the National Housing Survey on which the Index is based said their income had risen significantly over the previous 12 months for a net of 21 percent positive responses. This was up 5 percentage points from the January survey and was 3 percent higher than a year earlier.

Two other components were unchanged month over month. The net percentage of Americans who told pollsters that they were concerned about the possibility of losing their job was unchanged from the previous month at 72 percent. Those who said they were not concerned decreased from 86 to 85 percent, offsetting a 1-point increase in those who said they were concerned. The net was down 9 points from the February 2019 survey.

The share of Respondents who thought it was a good time to sell a home was unchanged on net at 45 percent, again with a 1-point increase in the number of yes answers to 67 percent and a 1-point decline in the no responses to 22 percent. Net yes responses grew by 15 percentage points year-over-year.

The remaining three HPSIs component fell for the month although they all were higher than a year earlier. Fifty-nine percent of respondents thought it was a good time to buy a house, unchanged from the previous month while the share of those who disagreed moved 2 points higher for a net of 27 percent compared to 29 percent in January and 15 percent in February 2019.

The share of consumers who think mortgage rates will continue to slide increased from 7 to 8 percent while there was a big jump in those who expect higher rates, up 5 points to 38 percent. The net of those who are looking for lower rates fell to -30 percent, but this is still an improvement on the net negative 52 percent a year earlier.

"The HPSI remained relatively steady in February, reflecting another month of robust consumer sentiment consistent with strong housing market data to start the year," said Doug Duncan, Senior Vice President and Chief Economist. "In particular, household income sentiment picked back up as more workers saw their wages rise amid tight labor market conditions, helping bolster already strong housing demand. Though American consumers' optimism about the direction of the economy is higher this month than at any point in the survey's nearly ten-year history, the late February stock market decline, precipitated in part by evolving expectations of the potential economic impact of the coronavirus, is not fully reflected in this month's results due to the timing of our survey data collection, which ended February 22. We may see some volatility in sentiment in the months ahead as these circumstances play out."

The NHS, from which the HPSI is constructed, is conducted monthly by telephone among 1,000 consumers, both homeowners and renters. In addition to the six questions that are the framework of the index, respondents are asked questions about the economy, personal finances, attitudes about getting a mortgage, and questions to track attitudinal shifts.