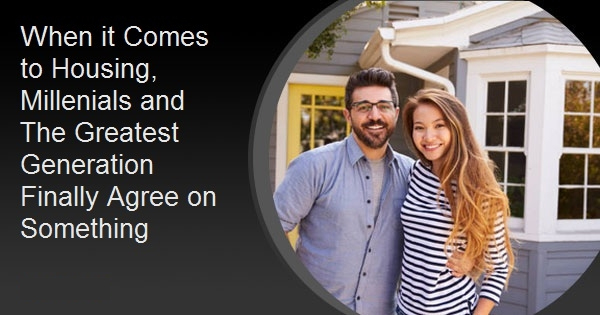 When it Comes to Housing, Oldest and Youngest Generations Finally Agree on Something

The National Association of Realtors® (NAR) said its latest study on generational trends in homeownership has found that some homebuying characteristics of younger millennials are very similar to those of the silent generation. NAR's 2020 edition of its Home Buyer and Seller Generational Trends report found that, despite the age gap between the two group-the silent generation could be the great grandparents of the younger cohort-the two are likeminded in terms of buying preference.

For both groups, proximity to friends and family was a major part of their home buying decision. Slightly more than half (53 percent) of the younger group, homebuyers between the ages of 22 to 29 listed this as a major consideration in picking a neighborhood, identical to the share of those in the 74 to 94 age group. For a third of the older group, living closer to family and friends was the primary reason for selling their home. In previous surveys the top rationale has been relocating for work or retirement.

NAR surveyed homeowners who had bought a primary home between July 2018 and June 2019 and 5,870 responded. The numbers by age group are given in the chart below. Another similarity between the two age groups is seen in those classified as "recent buyers." Younger millennials and silent generation buyers who purchased a new home, were the most likely to make the purchase due to the amenities a newly constructed home provides. This aligns with norms of older generations but represents a new trend for younger homebuyers.

Eighty-eight percent of homebuyers in the young Millennial group were first time homebuyers, nearly three times the one-third share in the population as a whole. Among older Millennials, those 30 to 39 years of age, 52 percent were first timers as were 23 percent of Gen X (aged 40 to 54.) Boomers were also divided into younger (55 to 64) and older (65 to 73) groups of which 13 percent and 6 percent respectively had just bought their first home. Only 5 percent of the silent generation were novice homebuyers.

Buyers aged 30 to 39 accounted for a quarter of home sales, followed by the next oldest group as 23 percent. Sixty-one percent were married couples followed by 17 percent single females. Unmarried couples and single males each bought 9 percent of homes sold. Eighty-four percent of buyers identified as white, dwarfing other racial groups, none of which constituted more than 7 percent of the total. Generation Xers had the highest household incomes of any age group at $110,900. Still, that group continues to face some challenges. Eleven percent of Gen X home sellers said they had wanted to sell earlier but were delayed because their home was worth less than the mortgage and 5 percent of that group's buyers said their home purchases were delayed five years or more in part due to student loan debt and lingering impacts of the Great Recession.

The types of homes purchased didn't vary much by generation. The vast majority were located in the suburbs, were pre-owned, and detached single family dwellings. Median prices ranged from $206,300 for the young Millennials to $282,000 for the older members of that generation. Not surprisingly, the median size of homes was closely allied with the prices; the youngest buyers bought the smallest homes, a median of 1600 square feet while older Gen X bought the largest ones at 2,000 square feet, 100 square feet larger than the more expensive homes bought by older Millennials.

One characteristic of homes that did vary by generation was the age. The youngest buyers bought the oldest homes, the median year of construction was 1978. The median construction year for homes bought by the Silent Generation was 2001.

For all generations the first step in the homebuying process was to look online although the oldest generation tended to contact an agent almost as often as they used the web. Buyers typically searched for 10 weeks and looked at a median of nine homes.