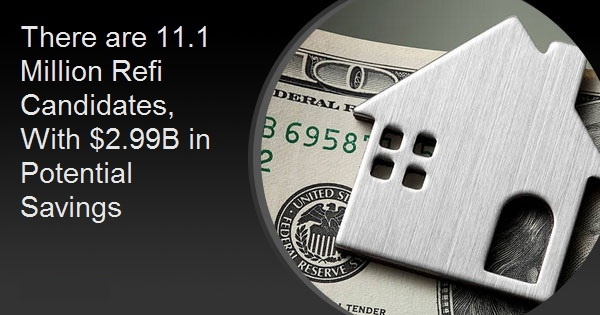 There are 11.1 Million Refi Candidates, With $2.99B in Potential Savings

With Freddie Mac's average rate for 30-year fixed-rate mortgages (FRM) hitting 3.45 percent late last week. Black Knight estimates, in its current Mortgage Monitor, that there are now 11.1 million refinance candidates. These are homeowners who currently have a qualifying 720 FICO score, a loan-to-value (LTV) ratio of 80 percent on their existing mortgage, and a rate high enough that they could shave off at least 0.75 percent by refinancing. These homeowners could save an average of $268 per month, freeing an aggregate of $2.99 billion per month if all were to refinance.

Those who took out a mortgage in 2018 remain the largest contingent in the refinancing pool at 1.67 million, but there are eight other vintages that have at least 500,000 potential refinance candidates. Black Knight says its credit criteria is conservative by design. Including those who might still refinance with more liberal underwriting, there are close to 22 million homeowners with rates more than 75 basis points higher than those prevailing at present. The refinance population is very sensitive to even the slightest rate movements; there are big increases or decreases in their number if the rate changes even 1/8th of a point. Before rates declined in January, there were 8 million homeowners who could benefit from refinancing; that number increased by 40 percent over just the next four weeks. Black Knight estimates that, should rates fall to 3.375 percent there would be about 2 million more homeowners joining the refinance pool. This sensitivity has been demonstrated over the last several years. Refinancing hit an 18-year low in the fourth quarter of 2018 when rates rose above 4.5 percent and then rebounded by 250 percent to a 6.5 year high in the fourth quarter of 2019 as those rates retreated. While the bulk of this increase was in rate/term refis, cash out transactions also rose to more than a 10-year high, with 600,000 homeowners pulling out $41 billion in equity, the largest quarterly volume since 2007. And, indeed they do have that equity. While the amount of tappable equity-the amount that can be withdrawn without lowering the LTV below 80 percent-did have a seasonal dip in the fourth quarter of 2019, it was at its highest year-end total on record, $6.2 trillion. Home price growth, fueled by low interest rates, was up 9.0 percent on an annual basis in Q4, the third consecutive quarter of year-over-year growth and the highest such an increase since the third quarter of 2018. An estimated 46 million homeowners with mortgages have an average of $119,000 in tappable equity, about $8,400 more than they had a year earlier.

Tappable equity increased year-over-year in all 100 of the nations largest markets in the fourth quarter. Some of the largest increases in the fourth quarter were in the Midwest and Northeast regions while some of the formerly hottest markets such as San Jose, Denver, and Dallas gained the smallest amounts, less than 5 percent. More than one-third of the nationwide total resides in California.

More than 75 percent of those who could withdraw equity also have current mortgages with rates higher than 3.5 percent, providing even more incentive to do so. In fact, 76 percent of those who took cash-out refis in the fourth quarter also improved their rate; half by at least 50 basis points and 25 percent reduced it by a point or more.

Refinancing makes more sense than ever vis-à-vis taking a second mortgage or home equity line of credit (HELOC) to access equity. The average opening rate on a HELOC in the fourth quarter was 6.2 percent, 2.5 percent higher than the 3.7 percent average 30-year mortgage rate.

Total mortgage debt, including first and second liens and HELOCs is estimated to be about 52 percent of the value of the homes. That percentage hit a recent low of 51.4 percent last summer but is down 1 percentage point from the fourth quarter of 2018.

However, for lenders there is a downside to all of this actual and potential refinancing activity. As Black Knight Data & Analytics President Ben Graboske said, even as refinancing has hit a 6.5 year high, servicers are facing customer losses.

"Despite a surge in refinance lending driven by low rates, servicers continue to struggle in their efforts to recapture refinancing borrowers, with only one in five being retained by servicers in Q4 2019," he said. "Retention rates rose along with refinance volumes early last year, hitting an 18-month high in Q2 2019, but retention rates have since fallen in each of the past two quarters."

The retention rate for rate/term refinancers, traditionally the easier business to retain, was less than 25 percent in Q4, and for cash-out refinances it was even worse. That rate dropped from 19 percent in the third quarter to 17 percent, the lowest in more than four years. At the same time, cash-out lending hit a more than 10-year high at the end of 2019, with some 600,000 borrowers pulling an estimated $41B in equity from their homes, the largest quarterly volume since 2007. According to Graboske, "A large driver has been a recent failure to retain 2018 vintage mortgages, which goes to show just how quickly lender/borrower relationships can evaporate without the right data and tools for servicers to early on identify clients in their portfolios with sufficient tappable equity, and act to retain them. Borrowers who left for 'greener pastures' received an average 0.08% lower interest rate than those who stayed, strengthening the need for tools to ensure rate pricing is competitive.

He said, lenders should look at the potential for business going forward and realize that "improving the retention and recapture of this business is of critical importance. Data-driven portfolio retention strategies that help determine borrowers' motivations for refinancing can go a long way in this regard."