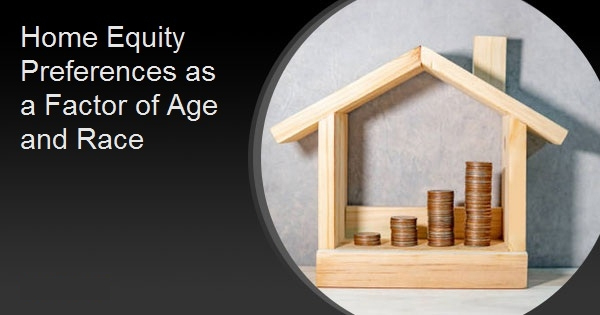 Home Equity Preferences as a Factor of Age and Race

A recent post on the Urban Institute's (UI's) Urban Wire blog focuses on some overlooked data on FHA's Home Equity Conversion Mortgage (HECM) program. The program guarantees loans, commonly called reverse mortgages, for homeowners 62 years and older. These loans allow homeowners to withdraw the equity from their home, either in a lump sum or in monthly payments. The loan does not need to be paid back until the homeowner leaves or sells the house.

UI analysts Karan Kaul, Laurie Goodman, and Sarah Strochak write that seniors are currently "sitting on a mountain of housing wealth" (estimated in 2017 at $3 trillion) and are anxious about their finances. Therefore, one might expect HECM to be a well-used program. But even as the number of older Americans has grown, participation in the program has dropped from 73,112 borrowers to 33,000 between 2011 and 2018.

The three say some data from the most recent Home Mortgage Disclosure Act (HMDA) release (historic information is not available on reverse mortgages from HMDA) could help FHA understand how to increase participation in the program. These point to the differences in the way racial and ethnic groups differ in the use of reverse mortgages.

First, they found that HECM is far and away the least popular of the four methods of extracting equity. Its 33,000 loans accounted for only 1.3 percent of the combined 2.5 million loans originated for this purpose in 2018. Reverse mortgage originations were exceeded by:

Beyond the low participation rate, UI finds that use of the program has distinct differences among racial and ethnic groups. White and black homeowners make up a larger share of reverse mortgage lending than they do in the forward equity lending markets. White borrowers took out 77.7 percent of HECM loans in 2018 and black borrowers 7.2 percent, they account for 72.8 and 3.0 percent of HELOCs originations, 68.1 and 5.4 percent of closed end seconds and 63.0 and 6.0 percent of cash out refinances.

They also found that the median property value for those Hispanic borrowers who did take out reverse mortgages was higher than their white counterparts - $365,000 versus $305,000 - even though Hispanic median incomes were lower, $24,000 versus $27,000, as was overall wealth. This is interesting because the home is the single largest source of wealth for most Americans.

They speculate that black homeowners have historically accrued equity at a slower pace than other groups. Their median equity had grown from $56,000 in 1989 to $69,000 at the peak of the housing bubble in the early 2000s, only to plummet back down to the 1989 level when the housing crisis hit. According to the Federal Reserve's 2016 Survey of Consumer Finances, white and Hispanic households had much larger increases not only during the housing boom but in the recovery that followed the Great Recession. The authors point out that, while these racial and ethnic differences could have been driven by location, borrower equity, or preference, there could be another factor. Changes made by FHA in response to losses on bubble-era HECM loans, such as reduced borrowing limits, enhanced appraisal requirements, and premium changes may have had a disproportionate impact by race/ethnicity. This is important for FHA to consider as it contemplates additional changes to the program.